You are here: Home>Locations>Maxstoke>Maxstoke Priory Church 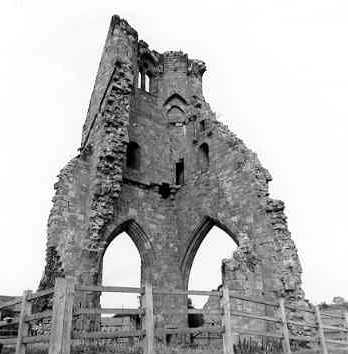 The remains of the church of Maxstoke Priory which was built during the Medieval period. The site is located 200m east of the present church at Maxtoke.

1 Remains of the tower and walls of the monastic church. Remains of the tower comprise the N wall almost to its original height, part of the E wall with complete chancel arch, and fragments of the remaining walls. There are stumps of the chancel and transept walls.
4 The remains of the tower are badly cracked.
6 Photographs.
7 The church consisted of a nave without aisles, a central tower, N and S transepts and a chancel. Chancel was divided by butresses into 4 bays. In 1874 a grave, ?of Sir William de Clinton was uncovered in front of the High Altar. Also a fragment of the high altar was unearthed. In Buck’s engraving of 1729 the entire tower stood and the SW pier appears to have fallen in the late C18.
8 The crossing tower starts square but continues octagonal, externally by very high broaches, internally by squinches -a friars’ rather than a cannons’ motif. The crossing arches to the N and S are oddly narrow. The arches die into the imposts. On the E of the NE crossing pier is the jamb of a large chancel window. The chancel was straight headed and had no aisles. The nave was aisleless too.
9 Drawing, by Buck, of 1729.
10 Part of the remains of the tower collapsed in the winter of 1986/7.
11 Of the original four piers which supported the crossing tower, only two still stand, though a third collapsed as recently as 1986. An excavation of 1874 revealed an elaborate chancel of four bays with an additional chapel on its north side, the crossing tower, transepts, and an aisleless nave with an additional building of uncertain function.
12 Architectural Report of Maxstoke Priory by RCHME.

email
More from Maxstoke
More from Chapels and Churches