You are here: Home>Locations>Combrook>Brookhampton Deserted Settlement 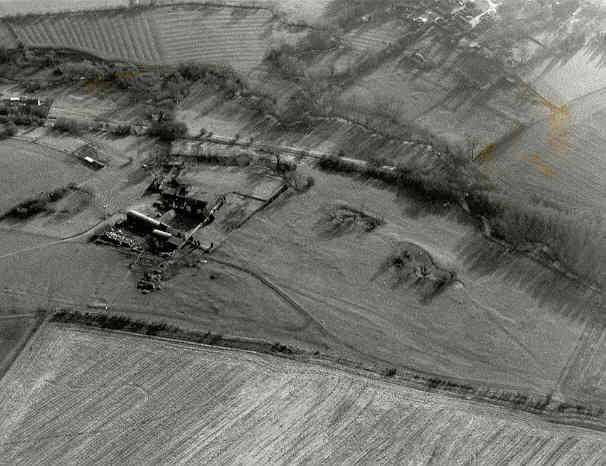 The Medieval deserted settlement of Brookhampton. The remains are visible as earthworks, which particularly reveal the foundations of the houses. The village is also known from documentary evidence. It was located north of Butlers Marston.

1 In Rous’ list there was a Poor Law dispute in 1663. The earthworks are clear, including some fishponds (PRN 1176). A mill is also recorded (PRN 1175).
2 Excellent archaeology (A*). Period of desertion known but documentary evidence inferior in quantity (1).
3 In field centred on SP3150 an area of disturbance is bisected by a modern track, a few disconnected banks and what may be fragmentary foundations can be seen, although unsurveyable.
4 Brookhampton is the only site in the county which presents recognisable house foundations. A number of two-roomed houses can be recognised here, but the characteristic opposing doorways and cross passages which would place them in the longhouse category seem to be absent.
5 This site warrants further work and may prove to be worth scheduling. The comment in reference 4 is no longer valid as house foundations have been found on a few other sites.
6 This site is still the best example of visible house foundations.
7 Field survey observations from 1977: village earthworks clearly visible between railway track and River Dene. A deep leat runs around upper side of village site and leads down to the river.
8 Site scheduled in 2000.