You are here: Home>Locations>Blackdown>Blackdown Mill 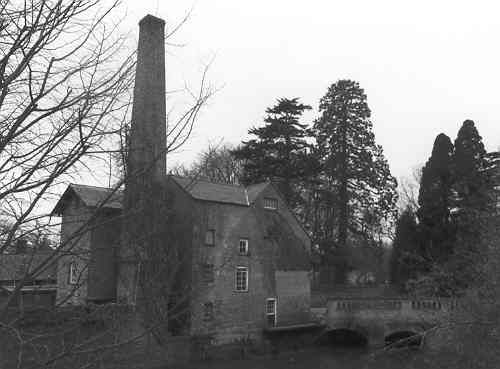 Blackdown Mill, a watermill for which there are documentary records from the Medieval period. It was in use until the 1920s and the waterwheel and some of the machinery survive. It is on the south side of Hill Wootton Road.

1 A mill, probably this site, is recorded in 1086. Later it became the property of Coombe Abbey. Information on ownership exists for the 16th to 20th centuries. The mill operated until the mid 1920s. The buildings are now the premises of an antiques dealer. The mill is a mixture of 18th and 19th century buildings. The older part is a three-storey brick structure with a large wooden extension housing the waterwheel. The appearance of this building has been considerably altered this century. The waterwheel is in place, but most of the machinery has been removed. In the yard behind the mill are traces of a steam engine which was installed in the mid 19th century.
3 What one will remember is plenty of quaint embellishments, chiefly beasties.
4 Photographed in 1979.
5 Photos taken as part of A432 Improvements Survey of 1994.

Linkedin
More from Blackdown
More from Mills
More from Windmills, Watermills and Cornmills