You are here: Home>Locations>Radway>The Battle of Waterloo

The Battle of Waterloo 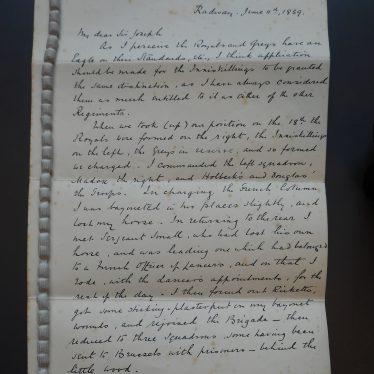 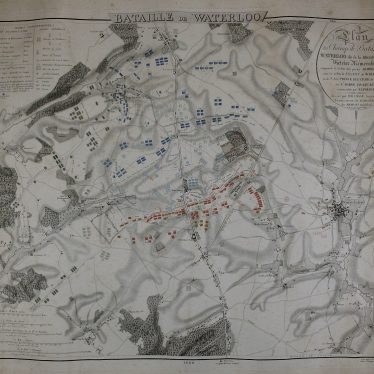 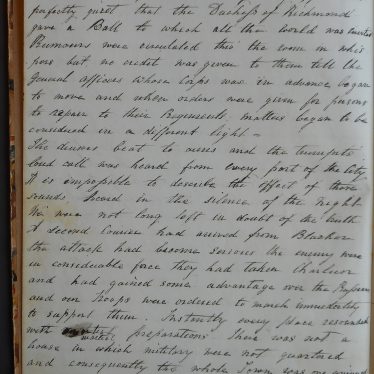 With the 200th Anniversary of the Battle of Waterloo on the 18th June, the documents selected give a first hand account by men that were there. On display is a handwritten account by Augusta, daughter of Sir John Whale, based on his account of events from the perspective of being stationed in a nearby town during the battle (Warwickshire County Record Office reference CR2900/35) and a letter from Lieutenant Colonel Sanderson Miller who fought in the battle (CR1374/1/1). Fiennes Sanderson Miller lived at Radway in Warwickshire. After a successful military career, he was a magistrate and deputy lieutenant for the county of Warwick and a burgess in Banbury. He served his entire military career with the 6th (Inniskilling) Dragoons.

When the Duke of Wellington first received the news about the attack on the Prussian Army on the 15th June, Sir John Whale believed that Wellington ‘…seemed to consider it as a mere affair of outposts which was not likely to proceed much further at the present…’.¹ Whilst the troops were told to be ready, there were no imminent plans to move and in fact, according to Sir John Whale, the Duchess of Richmond hosted a Ball.

It was clear that the British force began to take the threat more seriously when news arrived from General Blucher ‘…that the enemy were in considerable force. They had taken Charleroi and gained some advantage over the Prussians…Instantly every place resounded with martial preparations …baggage wagons were loading artillery trains tramping, officers riding on in all directions carts clattering, chargers neighing, bugles sounding drums beating and colours flying.’ ²

One wonders how much bluster there was behind Wellington’s observation as he set out that ‘when other generals commit any […], there army is lost by it and they are sure to be beaten when I get into a scrape my army get me out of it…The Duke of W had set off in great spirits observing that as Blucher had most likely settled the business by that time he should perhaps be back to dinner…’ ³

A most violent thunder storm

The weather did nothing to help proceedings, as during the afternoon of the 17th:

For details of the battle itself, Sanderson Miller’s letter, despite being written 14 years after the battle, is very clear about the role that he and the Dragoons took stating that ‘…the Royals were formed on the right, the Inniskillings on the left, the Greys in reserve, and so formed we charged. I commanded the left squadron…’ ⁵

You may remember that when we advanced, and the men began to fall from the fire of artillery, we dismounted and marched up the hill on foot, and on reaching the top mounted and I then perceived the enemy’s close Columns advancing near the hedge.

On seeing us they hesitated, and were inclined to turn. A person in plain clothes standing near the hedge close to the left of my squadron cried out “Now’s your time”, so over the hedge I went, and waited a moment or two for the men to collect, and then we were into the Column in a second…

So you will perceive that it was at the top of the hill that my squadron came into contact (with them). They were in square when I first saw them…

My squadron certainly completely broke one column, and, I always understood took a number of prisoners, and the Eagle which afterwards got into possession of one of the other Regiments…’ ⁶

Lieutenant Colonel Miller did not escape the battle unscathed, writing that In charging the French Column, I was bayoneted in two places slightly and lost, and lost my horse…got some sticking plasters put on my bayonet wounds and rejoined the Brigade…⁷

He was wounded again later that afternoon, severely enough that this time he was unable to continue the fighting. The severity of the injury is made clear in his obituary of September 1862 which says ‘…Struck in the thigh by a grape shot fired at the close of the day, when the French were beginning their retreat, his shattered frame was carried to Brussels, and seemed likely to make it’s last resting place there…he never recovered from the effects of the wound; at intervals he suffered renewed pain, and was crippled to such a degree that he walked or rode with difficulty.’ ⁸

As a result of the victory for the Allied forces, Napoleon surrendered and was exiled to St Helena where he remained until his death in 1821. The Duke of Wellington used the victory to secure a peace deal with the French and subsequently became Prime Minister in 1828.

For a timeline of the battle itself, the BBC gives a good guide to the battle through a clear and concise chronology of the day

This article is June’s Document of the Month for the Warwickshire County Record Office. Further articles can be found on their website.

email
More from Radway
More from Wars and Campaigns (others)