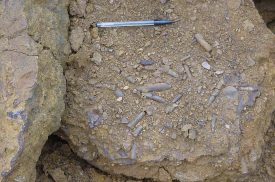 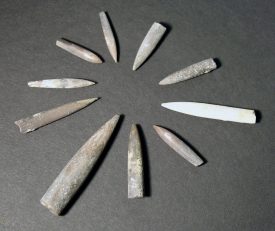 Edge Hill, in southern Warwickshire, is well known as the site of the first major battle of the English Civil War. On Sunday 23rd October 1642, the Parliamentarian and Royalist armies of the Earl of Essex and King Charles the First clashed in the fields below the hill, between Radway and Kineton. Both sides claimed the victory. However, historians generally agree that the royalists had the advantage, by gaining command of the road to London. Much of the battlefield site is now owned by the Ministry of Defence.

There is a much older ‘battlefield’ at Edge Hill, dating back 190 million years to the early part of the Jurassic Period. This has been revealed in the Edge Hill quarries where the local Hornton Stone has been extracted for architectural and ornamental stone, and for aggregate.

The Jurassic battlefield is actually a ‘belemnite battlefield’. This is a term used by palaeontologists for dense accumulations of bullet-like belemnite fossils preserved within sedimentary rocks. The example at Edge Hill was exposed by quarrymen as they dug through the Hornton Stone (a type of sedimentary ironstone) into the softer siltstone beds beneath.

Belemnites are bullet-shaped fossils made up of the mineral known as calcite. They are found worldwide in sedimentary rocks which formed as layers of sand and mud in ancient seas between about 200 and 65 million years ago. The living belemnite was a squid-like animal. The fossil belemnite originally grew as a solid ‘shell’ within the body of the belemnite animal and seems to have acted as a counterbalance to the head during swimming.

The Edge Hill belemnite ‘battlefield’ appears to have formed during a time when very little sediment was being deposited on the local Jurassic seafloor. Over thousands of years, literally millions of belemnites built up to form a fossil-rich layer several centimetres thick.

Warwickshire Museum‘s collections include many belemnite fossils from Edge Hill and elsewhere. These strange, bullet-like fossils are frequently brought into the museum as enquiries.