You are here: Home>Locations>Warwickshire unspecified or out of county>The Armistice in Warwickshire: Part Two

The Armistice in Warwickshire: Part Two 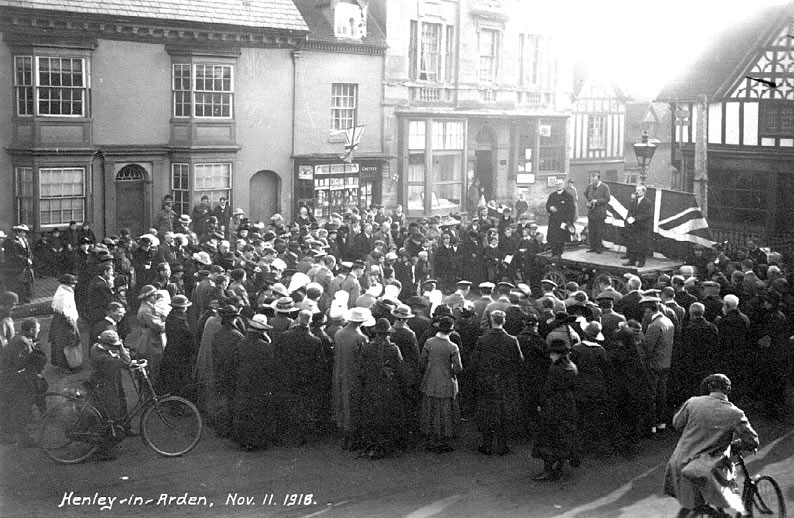 Crowd of people in Henley-in-Arden celebrating Armistice Day. November 11th 1918 [The indoor service planned for 11th Nov. was called off because of the 'Spanish' influenza. Instead, an outdoor meeting was held on 12th Nov. in the Market Place. Dr Nelson (the High Bailiff) made a short speech; also on the platform were the Revd. L.G.Schofield and Mr T.R.Perkins.]
IMAGE LOCATION: (Warwickshire County Record Office)
Reference: PH, 352/91/108, img: 1248
This image is subject to copyright restrictions. Please see our copyright statement for further details.

As detailed in part one, news of the Armistice had spread rapidly around Warwickshire on Monday 11th November 1918 and crowds had gathered together to hear and celebrate the news.

Later that day, many churches held church services with full congregations. At Coventry Cathedral, a service was held at 2pm, after which the choir and clergy ascended the tower to sing the Old Hundredth Hymn (All People That On Earth Do Dwell) and the National Anthem, before they gave three cheers. The bishop designated the following Sunday, November 17th, to be kept as a Thanksgiving Day by the church and many more special services were held across the county.1

Celebrations also took place in hospitals across the county. In Leamington, at the VAD hospital at ‘The Warren’, the 53 soldiers there assembled for the National Anthem, decorated the hospital in a patriotic style and were allowed a pint of beer at dinner (bed patients were given a glass of champagne). At the Home for Incurables, ‘within a few minutes of receiving the joyous news that the armistice had been signed the big bell was rung, and soon the whole building resounded with the tinkling of bells and of glasses… every available article with which an expression of feeling could be made was requisitioned’. In Rugby, dances were held at the Infirmary and Te Hira VAD hospital.2

Schools likewise celebrated the occasion, most of them giving the children the rest of the day off. At Stretton on Fosse school, the news was entered into the school logbook:
‘Germans signed Armistice & hostilities ceased. Mr Blow, Chairman of the Managers & Mr Longford, Manager, came to school to tell us the good news. The National Anthem was sung, & cheers were given for the soldiers & sailors. In the yard, Mr Longford fired three shots with his gun & the children saluted the flag’.

The following day, ‘we decorated yard & school with flags & bunting, & children had a long play-time. In the afternoon Mr. Blow came up & said tomorrow would be a holiday in honour of the occasion’.

Many schools, however, had already been closed by the Medical Officers of Health due to the influenza epidemic which was rife in Warwickshire that month – after the Armistice, the school at Stretton on Fosse closed for a fortnight before re-opening on Monday 2nd December. Many of the parish magazines at the time, including that for St Andrew’s, Rugby, have an unusually long list of burials for November. In Curdworth, the schools were closed and all social meetings were postponed.4

At the Warneford Hospital in Leamington, the Matron and many of the nurses had succumbed to influenza and so there were no Armistice celebrations. At Henley in Arden, the thanksgiving service had to be held outdoors due to the outbreak. Rugby Urban Borough Council minuted that because of the armistice and influenza, it was impossible to complete the usual council work and the meeting was therefore adjourned.5

Celebrations were also muted by the fact that many people were unable to participate in the gladness, having suffered through four tortuous years of loss and hardship. The Leamington Courier reported that ‘as one moved about the streets one could not help being struck with the number of people who were unable to participate in the joy making’. In Warwick, the Mayor said that ‘the conclusion of an armistice was an occasion for deep thanksgiving for relief from the suffering and strain of war, but not a time for organised public rejoicings’. Peace had not yet been signed. Celebrations were, therefore, more muted than would perhaps be expected and no one was brought before the Police Courts as a consequence of the armistice merrymaking.6

Thoughts of the future

Other thoughts were also in the air. There was a general election very close at hand. Food was still in short supply and there was a serious shortage of milk in the Rugby District. For those who had work in the munitions factories, there was the worry of jobs disappearing overnight. The vicar for Curdworth wrote that ‘we are very sorry to hear that the [munition] workers are being disbanded. Munitions are happily no longer needed, but it was thought possible that other work might be provided’. In Nuneaton, one munition worker’s wife said that ‘it’s all very well to talk about peace… but my husband will be bringing home only half the money he is now’. Thoughts also turned to how to commemorate the fallen.7

Perhaps November 11th was summed up best in the parish magazine for Stockton–
‘The day of the signing of the Armistice passed quietly in our village. There was too much sickness for any public celebration, most us just felt quietly thankful, with a loving thought for those who went and will never come back.’8Footnotes