I was born February 25th 1937 at 2, The Common, Polesworth, which was also the birthplace of my dad Ernie. The house is still there, over the road from the Royal Oak, but address was changed in the 1960s because of the houses that were built on what used to be our garden, and is now part of Common Lane.  My wartime days were spent between that address and the Spread Eagle in High Street which was run by my mother’s family, Laura Pass and her sons. My mother frequently helped out. 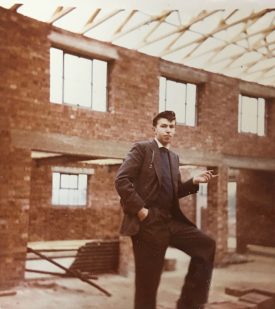 I am standing in the Memorial Hall, Polesworth, which was under construction at the time. Image courtesy of Leslie Searle

It was only a short distance to the Nethersole Infants School, and later to Nethersole School on the corner of High Street and Station Road. The teachers included Harry Stafford (in sergeant’s uniform), Mr. Bartlett, and the head mistress Miss Allport. It was she who called me out of class one day to inform me that had I written Atherstone rather than Tamworth as a grammar school preference (should I pass the eleven plus exam), I would have been accepted. Apparently, the Staffordshire education authorities at that time were not accepting pupils from outside the county. Why could this information not have been made public before the examination date? A severe nose-bleed during the arithmetic exam didn’t help my cause. However,  because of the ‘county problem’ it was irrelevant.

Taken from the top of Polesworth Abbey in 1956 or 1957. I attempted to achieve a panoramic effect but didn’t quite manage to get the angles right. Image courtesy of Leslie Searle

I did an apprenticeship as a toolmaker and draughtsman at Fisher and Ludlow in Castle Bromwich, a factory which had been making Spitfires only a decade earlier. It was during these years that I took the photos from the top of the Abbey. At a Christmas Eve dance in 1956 at the Parish Hall I met a certain young lady called Ivy Turner from Nuneaton.  we have recently celebrated our Diamond Wedding anniversary!

I bought a tenor saxophone from Yardleys music shop in Birmingham and played with a dance band that included Lloyd Jackson, Tony Lee and Robbie Matthews.

The apprenticeship ended in the Summer of 1958 and I began two years of National Service in the following November. National Service was abolished at the end of that year, but not for the guys who were already ‘in’!. However, I spent 18 months of that time at RAF Eastleigh, Nairobi. On breaks from the military I managed to climb Kilimajaro and visit Victoria Falls.

I returned to Fisher and Ludlow but decided I would really like to make music my career. Ivy and I married in 1961 and I re-joined the RAF as a musician the next month. The first two years I was with a regional band stationed at Cosford. The band played engagements up and down the country, including London, Newcastle, Lincolnshire, Llandudno, Swansea, Belfast, Isle of Man, etc. Quite a geographical education!

The education continued for the next three years. I applied for a posting to the RAF Germany Band which was stationed in Cologne, where I played saxophone and flute . The sightseeing also continued with concerts in Bavaria, Amsterdam and six trips to Berlin, and many other places. More importantly, our daughter was born in 1965.

My military service ceased in 1966 and having made a number of musical contacts in Germany, including writing a number of compositions and arrangements for the country’s top Big Band, Kurt Edelhagen, Ivy and I decided to stay in the area „for a year or so…. and we are still here.

We moved to Wermelskirchen, a town of about 25,000 inhabitants, and I started my own music school in nearby Remscheid teaching electronic organ and guitar. The school was extremely successful. Most of my mornings were spent composing music such as this piece1 (much of which can be found in internet by checking out Leslie Searle composer), teaching it in the afternoons, and playing it in the evenings, including 15 months in the accompanying band for the musicals Hello Dolly and Hair when they were first performed in Germany.

I ceased teaching some years ago, but I still write – and play my preferred type of music – jazz. But I did manage to find time for other activities – another daughter was born in 1972! Both daughters and their families live nearby and we have three grandchildren.

Taken from the top of Polesworth Abbey in 1956 or 1957. One of the names on the memorial at the bottom of two of the photos is that of my uncle, Henry Vincent Searle who died just before the end of WWI and is buried at Rouen. Image courtesy of Leslie Searle

Of course, Ivy and I have paid several visits to Polesworth and Nuneaton since we first went to Germany in 1963. The loss of the beautiful thatched cottage in Polesworth Square was a tremendous loss for the village, and I always miss being able to see the Abbey clock from the river bridge. Indeed, the Abbey itself is almost completely obscured be trees, as nice as they are.

Les has said that if anybody in Warwickshire (or Tamworth) remembers him, he would be delighted to hear from them.