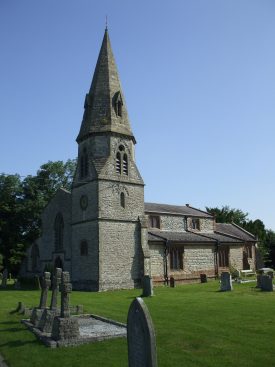 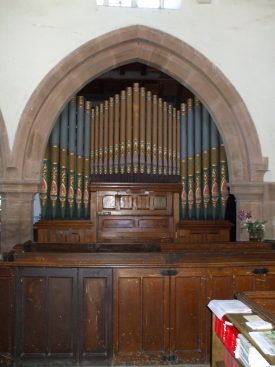 The church dates back to the early 13th Century and is Grade 2 listed. Standing on high ground to the eastern end of the village its spire can be seen for many miles, especially when floodlit in the evening. All that remains of the original building is the magnificent stone font, the blocked doorway in the south wall of the chancel, and the eastern bay of the south arcade of the nave. In the 14th Century the church was almost entirely rebuilt, and considerable work was done in the chancel in the 17th century.

Rebuilt in the 19th century

The church was again almost entirely rebuilt in the 19th Century by J. Potter, whose father supervised James Wyatt’s alteration to Lichfield Cathedral. At this time the upper windows, north aisle and porch to the north of the Shuckburgh Chapel were added, while the tower and west end of the nave were rebuilt. The end of that century saw more restoration work, especially in the chancel.

Above the altar table the beautiful oak panel is from Coombe Abbey, and that around the walls from Shenton Hall (Leics). There are several floor tablets and the lettering is mostly illegible, but one is dedicated to 16 year old Bert Clark and dated 1638. The chancel roof timbers are noteworthy, they are 17th Century and form a king-post roof.

The font is 13th Century, of stone, octagonal in shape, and each side is carved with trefoils. In the south aisle wall are two superb coloured windows in memory of members of the Darlington family who resided at Bourton Hall 1881-1902.The artist was W. Kempe, a leading craftsman of the day.

Memorial to the Great War

The south aisle also contains the memorial tablet to ten men from the parish who died in the Great War 1914-1918. The north chapel contains a family memorial to the Shuckburghs 1717-1942, and was restored in 1921. The churchyard is still in use as a burial ground and many old tombstones and box tombs remain. There is a Commonwealth War Grave and stone to Sapper Brown, who was killed as he cycled from Bourton to Kineton Camp during WW2.

This is an abridged version of the church history published on the Draycote Benifice website, who have kindly given permission for its use.

Map marker in the right place? If not, please correct the map.
Locations
Bourton on Dunsmore (53)
Subjects
Chapels and Churches (696)
Remembrance and War Memorials (71)