You are here: Home>Locations>Rugby>Gladys Ingram of Rugby 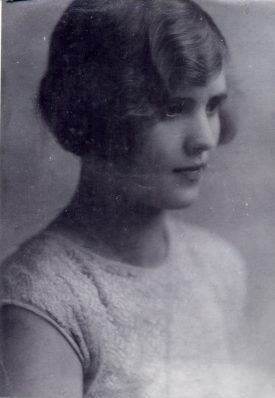 Picture of Gladys Ingram, by George Redding. Taken in the late 1920s or early 1930s.
Picture courtesy of J. Ingram 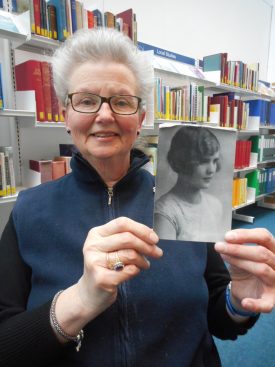 The article on George Redding allowed me to share this photo of my mother (nee Ingram). My Mother was born in Rugby in King Street off Newbold Road, opposite the police station. She had a brother and a sister (Charles and Florence).

Her father (Charles Henry Ingram) was a splicer at the Willans works. When he retired, they had to finish that job as nobody else could do splicing – it was an art! Her brother, Charles, also worked at Willans. They both played the cornet in the prize winning town band. My Granddad used to come home from the Willans works, and the first thing he would do was to have a wash with the carbolic soap. I remember the smell, he’d scrub himself all over. he’d sit in a Grandfather chair and I have one now, because of it. He’d always got his lunchbox under his arm, it used to take him forever to get up the Newbold hill when he was older.

My mother worked as a tailoress for an outfitter making women’s and men’s suits in Church Street (where the Rugby Advertiser is). My mother was married at St Andrew’s. She met my father, who came to Rugby from the Cotswolds, Winchcombe. He came to Rugby when he was about 16, to work for Lord March at Clifton. He came to look after his horses – my father was a very good horseman indeed. And when my mother was at a dance in Clifton, the two met. My mother said they weren’t allowed to be any later than 10 O’Clock.

I still live in the house I was born in, I’ve been there 70 years. That house, they saved up between them for when they were married. They couldn’t afford wedding photographs because of saving. The house would have cost £200.