You are here: Home>Locations>Offchurch>Blue Mondays: Feeling Down in January is Nothing New

Blue Mondays: Feeling Down in January is Nothing New 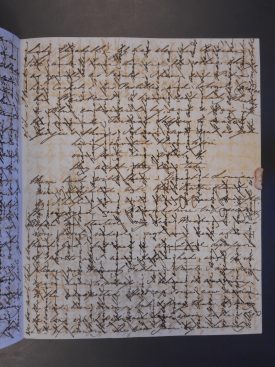 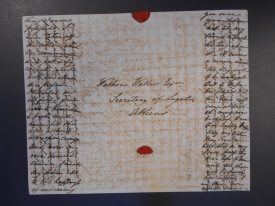 Anna's letter to her brother was written using cross-hatching to save on paper.
Warwickshire County Record Office, CR341/327/92 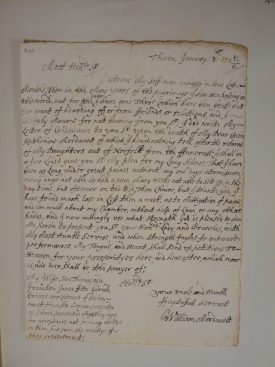 January can be a difficult time. The third Monday of January has been named ‘Blue Monday’ and is considered one of the most depressing days of the year. Christmas is over, presents have lost their novelty, resolutions have been broken, money has been spent, the weather is bitter, and the nights show no sign of shortening.

For many people the festive season, and the long dark months which follow it, are a time of particular hardship. For some, especially older people, it may be a time of intense loneliness. Many struggle with their mental health. The cheery lights and merry jingles only serve to highlight what they haven’t got.

It may be reassuring, in some way, to know that these experiences are timelessly human; that even two or three hundred years ago, people were struggling to keep their spirits up in winter. These letters from Warwickshire County Record Office describe two such people.

A change in medication

In this letter to her brother, Anna Eliza Jarrett describes the severe depression her husband experienced over the New Year of 1835. She attributes his downswing to a change in his medication. In spite of the doctor’s misgivings, she and her husband took a trip to Warwickshire and stayed at Offchurch, which seemed to be of benefit to him. She writes:

We enjoyed our Warwickshire trip exceedingly. Before we started my dear Husband was very poorly indeed – not any new attack thank God! But with a dreadful depression of spirits as I never before had and (if please my Heavenly Father) I think I may never again have to witness. I believe it was owing to the unexpected effect of some new medicine he had been trying, but I pray that it may be long ere I pass such days again as the 1st 2nd & 3rd of January. The New Year began heavily indeed with me, but blessed be God it brightened as it proceeded.1

In another letter held here, written on the 8th January 1705, William Mordaunt (a younger brother of Sir Charles Mordaunt of Walton) also suffers from physical ailments. However, he finds his loneliness and the lack of contact from his family to be more painful. The elderly man writes to his nephew:

I esteem myself more unhappy in some late months, than in the many years of the pilgrimage I have been passing in this world, not for the pains I have gone through (which have been great) but for want of hearing of or from friends or relations and I chiefly mourn for not hearing from you…2

He goes on to protest that he was not told about the death of his cousin until after his daughters had returned from the funeral. Yet even given his nephew’s neglect, William apologises for his own ‘long silence’, saying that he has ‘many days not [been] able to hold a pen, many weeks not [been] able to sit up’. Even so, William offers what he can, saying ‘I now willingly use what strength God is please to give me, herein to present you… with my most humble service’. He writes again on 23rd February, expressing his sadness that his son and other relatives do not respond to him.3

These letters from winters past can reassure us that we are not alone in our struggles; that humans throughout history have wrestled with loneliness and the black dog. They can also serve as a reminder to reach out to friends and acquaintances who might not be doing so well. After all, January can be a difficult time.

If you are struggling to cope or feeling low, please don’t wait for things to get too much. There are a range of mental health and wellbeing services available across Warwickshire that can help you to improve your wellbeing and support you during difficult times. Try and speak to someone you know and trust, and seek the advice and support of your GP. Alternatively, whatever you’re going through, you can always contact the Samaritans on 116 123.

This article is January 2018’s Document of the Month for the Warwickshire County Record Office. Further articles can be found on their website