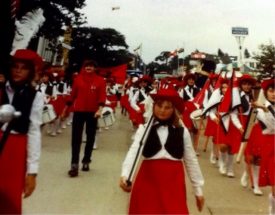 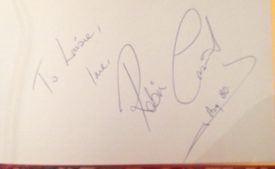 These are my memories of the Recro 80 Festival which took place at Stoneleigh Showground, Kenilworth to celebrate the Queen Mother’s 80th birthday. I was only 10 at the time so have asked my brother, mum, auntie and cousins for their memories too. It would be great if anyone else went and can tell me their memories and confirm some of my stories.

The ice rink and Robin Cousins

We had got free tickets as my mum and auntie were waitresses in the Royal Pavilion. I remember loving the festival as there was a massive fairground which had a huge slide, but the highlight for me was the ice rink. It was a temporary rink that was like a jigsaw puzzle, and wasn’t very smooth at all. Olympic champion Robin Cousins was on the ice and you were allowed to skate with him. My cousins, and me and my brother, all got the chance to skate with him. My cousin also had her photo taken with him, and I got his autograph in my autograph book.

Prince Charles attended the festival along with lots of celebrities, most of which ate in the Royal Pavilion, and my mum informs me that there was a concert in the evening. She says that Ella Fitzgerald performed! I think this is amazing. She also remembers Max Bygraves and Roy Castle performing, while Noel Edmonds was also there.

There was lots of stalls and entertainment going on. I think there was also some show jumping in the arena.

Does anyone remember going? Did anyone see Ella perform?