You are here: Home>Locations>Warwickshire unspecified or out of county>The Saxon Hoard of Archaeological Finds

The Saxon Hoard of Archaeological Finds 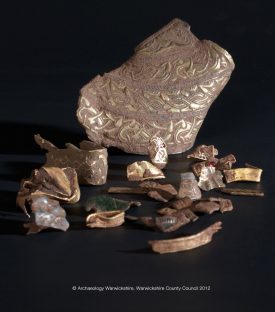 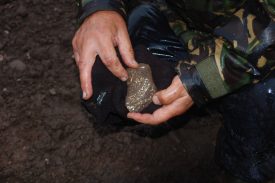 A team from Archaeology Warwickshire found a fascinating collection of almost 90 pieces of Anglo-Saxon metalwork in the field where the Staffordshire hoard was unearthed three years ago. Detailed metal detector and fieldwalking surveys were carried out on behalf of Staffordshire County Council and English Heritage. Covering the whole 5.5ha field, their investigations revealed 86 pieces of early Medieval metal, of which 19 are gold (4 decorated with garnets), 58 silver, and 9 copper alloy. The hoard dates from the 7th century when the area was part of the Anglo-Saxon kingdom of Mercia and there is still much speculation as to why and how it was buried.

“We are delighted with these discoveries – it certainly makes your day to be involved in finding something like this.” said Stuart Palmer of Archaeology Warwickshire. “These metal detectorists are specialists in battlefield archaeology – they have previously worked at sites such as Hastings, Bosworth, Oudenaarde and Flodden – and are expert at making sure every inch of the ground is covered in fine detail. Volunteers from Hammerwich, Warwick and the Stoke-on-Trent Museum Archaeology Society assisted with the fieldwalking.”