You are here: Home>Locations>Shipston-on-Stour>Chippendale in Shipston on Stour

Chippendale in Shipston on Stour 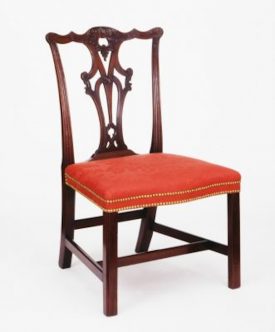 One of the 'Tomes' chairs
© Victoria and Albert Museum, London 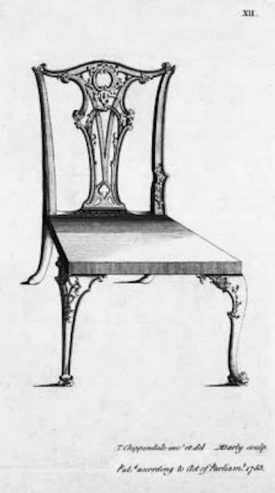 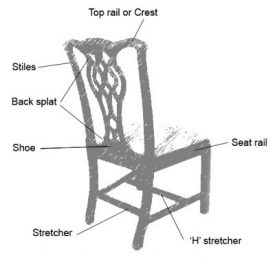 The back of a chair c.1765 from a set of six almost certainly by Gillows which, unusually, closely follows a Chippendale design.
Image courtesy of Robert Pitt 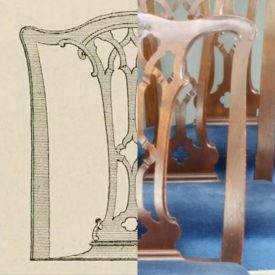 Whilst indulging my obsession with chairs, I was trawling through the online collections of the Victoria and Albert Museum (V&A)  when I stumbled on a chair, and then a set of six, which are of particular Warwickshire interest.

A link with Shipston-on-Stour

The V&A acquired the set in 1940 as part of a bequest by Miss Amy E. Tomes, (W.62 to 67-1940). She was the great-niece of Robert Tomes who originally bought the chairs in 1876 for his home in Shipston-on-Stour.  They were apparently restored by a cabinet maker in Stratford named Hancock.  Letters and drawings relating to the bequest were also acquired, (V&A museum no.W.85-1940).

The chairs are considerably older than 1876, as they were originally made between 1754 and 1780 to a design which appears in The Gentleman and Cabinet Maker’s Director, by Thomas Chippendale.  He was born in 1718 in Otley, West Yorkshire, and died in London in 1779. The engraved designs for all types of furniture in The Director, as it is known, were intended to be used as a source for cabinet makers to create their own work.  They were adapted to changing fashions, the skills of the makers and the depth of the pockets of the commissioning clients.  Often elements from several designs can be found in one chair.  Indeed, design elements from other pattern books of the period1 were also added to the mix.

This set, using high quality mahogany, might have been made in the north-west of England, where the choicest timbers were imported from the West Indies.

This particular pattern was one of the most used of all Chippendale’s chair designs.  Many versions were made by furniture makers throughout Britain and overseas, in a wide range of qualities.  Without evidence from bills and inventories it is impossible to date such chairs closely, although constructional evidence can also help.  We know that workshops were producing chairs of this pattern more than 30 years after The Director was published. Let alone those made in the late 19th and early 20th.

This style of chair is known as a side chair.  Originally when not in use for dining or playing cards, they were placed around the room against the wall.  The pierced backs made a decorative design.  Chippendale’s notes to the plate recommend that the design should be carefully drawn before carving.  He also indicated that the fabric used to cover the chairs usually matched the window curtains.  The height of the back should never be more than 22 inches (56 centimetres) above that of the seat. The other dimensions of the chairs are height: 94.5 cm, width: 59 cm, depth: 56.5 cm.

An interesting and unusual feature

An interesting and unusual feature is that on one of the shoes is an 18th century pencil inscription, ‘6 pedistals for Chipendel’s Backs’.  This shows that they were recognised as a Chippendale design at the time.  ‘Pedistal’ was the 18th-century term for the shoe, this is the section immediately above the back rail surrounding the base of the back splat, see illustration.

One of the ‘Tomes’ chairs can be seen at the Victoria and Albert Museum in the British Galleries, Room 118a, case 2, and another in the Furniture, Room 133, The Dr Susan Weber Gallery, case BY8.  Others from the set are on loan to Sewerby Hall and Gardens, Bridlington. One is in store.