You are here: Home>Locations>Warwickshire unspecified or out of county>The Armistice in Warwickshire: Part One

The Armistice in Warwickshire: Part One 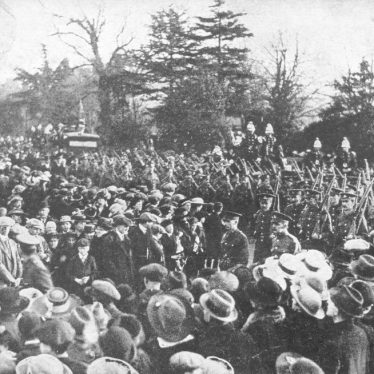 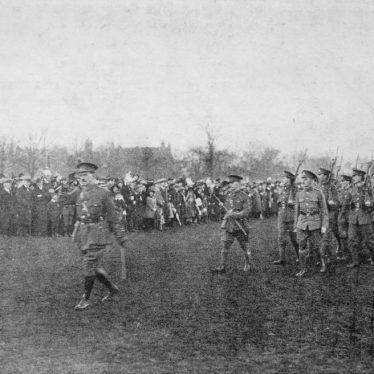 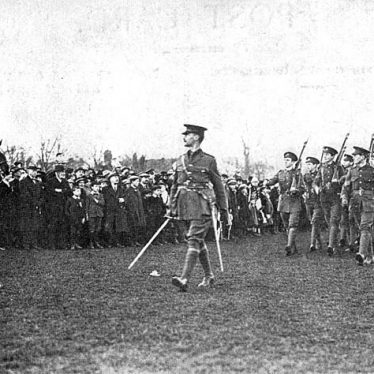 Rugby School O.T.C. saluting the flag at Rugby's celebration of The Armistice, 1918. [The Rugby School Officer Training Corps, led by its Band, headed the main procession through the town on November 12th. The procession started and finished at the Recreation Ground. The flag was saluted on the return to the Recreation Ground.]
IMAGE LOCATION: (Warwickshire County Record Office)
Reference: PH, 350/1911, img: 2375
This image is subject to copyright restrictions. Please see our copyright statement for further details.

Monday 11th November 1918 proved to be a typically cold, misty day. Hope had built up over the weekend that a peace treaty between the Allies and Germany was imminent, but there was no news in the morning newspapers that such a treaty had been concluded. According to the Warwick Advertiser, ‘people still waited and waited – patiently, somehow still a little doubtful, but with an intense yearning – for the actual official announcement that all was over’.1

The announcement came at 10.20am, when the Press Bureau announced on the Prime Minister’s authority that armistice terms had been signed a few hours earlier at 5.10am. Whilst the peace treaty, therefore, had not yet been fully concluded, it was a sign that the fighting was over at last.2

News reached Warwick about 11am and the Warwick Advertiser promptly posted the telegram giving the official news of the armistice in the office window. In Leamington, people had been perambulating all morning outside the Leamington Courier office and when the news was posted up outside, ‘cheers broke forth, flags and hats were waved, and the people gave free vent to their pent-up feelings’.3

Across the county, bells rang and sirens blared to spread the news. In Rugby, the British Thomson-Houston blower gave the signal about noon and this was soon taken up by engine whistles on the railway; Vero & Everitt’s factory whistle was blown in Atherstone and Graves’s works siren blasted at Long Itchington. To add to the cacophony, the bells of many parish churches and schools were rung with enthusiasm.4

Crowds had already gathered in Warwick to greet the ‘Big Gun’ coming ‘to stamp certificates of Warwick’s investments in the national securities during the week’, but crowds soon assembled in many of the county’s other major towns. The Mayors of Coventry and Leamington made public announcements. In Nuneaton, the Town Crier proclaimed the news – eight of the older children at Astley school were especially taken into town, a good four miles away, to hear the proclamation. Many businesses, shops, factories and pits closed for the rest of the day, some also being given Tuesday or even the rest of the week off. The trains leaving Coventry were crowded with people going home.5

Flags and bunting rapidly appeared everywhere – along streets and on houses, church towers and even motor cars. In Rugby, shops soon ran out of flags for sale. People lit Chinese lanterns in Alcester and Warwick on balconies and doorways. Bonfires were prepared on village greens at Long Itchington and Wolston. In Welford on Avon, in the evening, they paraded an effigy of the Kaiser round the streets on a lorry in a torchlight procession before burning it on the green. In other places, rockets and fireworks were set off at night. Rugby’s Jubilee Tower Clock was illuminated and some street lighting was reinstated. Whilst many were glad to see an end to lighting restrictions under the Defence of the Realm Act (DORA), however, some limitations were still kept in place.6

Rugby had pre-empted the signing of the Armistice and on Sunday, a special Urban District Council meeting had been convened to discuss celebration arrangements. It was decided to hold a united Thanksgiving Service on the Recreation Ground at 3pm. Several thousand attended the service, made memorable by the flypast of ‘a squadron of aeroplanes, at a low altitude’ which ‘came into view through the misty atmosphere of a typical November afternoon’. A speech was made by Mr J J McKinnell, JP, CC, who referred to the defeats of both the Spanish Armada and Napoleon. The Salvation Army Band led the singing and later gave a concert in the Market Place. Like many celebrations across the County, God and Empire featured strongly.7

On Tuesday, a procession led by Rugby School OTC assembled at the Recreation Ground to hoist the flag. Officers, wounded soldiers and VAD nurses, land girls and discharged soldiers and the Salvation Army all took part on day which turned out to be keen and crisp.8

More about Warwickshire’s reaction to the first Armistice can be found in part two.