You are here: Home>Locations>Cubbington>Annie Saunders. A Warwickshire Woman and Her Canadian Life

Annie Saunders. A Warwickshire Woman and Her Canadian Life 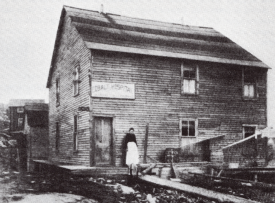 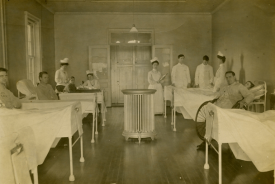 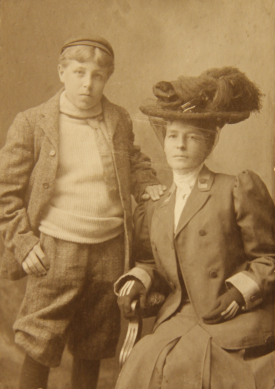 Annie Saunders had left Leamington with her family for the mining town of Cobalt, Northern Ontario. Life had been tough up until now, and illness and injury were prevalent. Having trained as a nurse at Warneford Hospital, she had skills that could help. Though she barely had time to recover from her own illness that had initiated the move, she put her training to good use and generously offered to nurse the injured from the explosion. Although there were three doctors, she was the only nurse in town. She and her youngest son moved into a miner’s bunkhouse, staying in the captain’s room, in order to tend to the injured, which included two young boys. This would not be Cobalt’s last fire.

After her house was rebuilt she used the front room as the first Cobalt hospital. One of the doctors operated on Annie’s first patient in that front room. Much of her nursing over the next months included visiting patients in their homes, be it a mining bunkhouse, boarding house, log cabin, or tent. There were several thousand living in Cobalt with a constant flux in the numbers. Cobalt was populated by people of many different nationalities, including Germans, Swedish, Italian, Chinese and a large French Canadian population. Annie found it a challenge, as many of her patients did not speak English and she did not speak any other language but English.

Living and working conditions were very primitive. She had to boil all water, cook, clean and do the laundry for her patients, often without assistance. There were virtually no safety precautions in the mines and no sanitation underground, and that summer of 1906, Cobalt had its’ first typhoid outbreak. Although small there were too many patients for Annie to manage alone. One nurse responded to Anne’s advertisement asking for help. She came up from Toronto to assist for a short time. However it was not until October 1906 when another nurse, Jessica Dixon, who was also from England, moved to Cobalt to assist Annie with this work.

A hospital move, and financial difficulties

By the time Jessica had arrived, Annie had moved the hospital into a rustic wood structure. One resident recalls the challenge these two women had keeping their patients warm. For many, the cots were too short and the women had difficulty keeping their patients’ feet covered. The winter in Northern Ontario is six months long with lots of snow and temperature well below freezing, often reaching -30 degrees Celsius at night.

Annie was known to accept all patients into her hospital, from all races and religions and whether or not they could pay for her services. There were no health care benefits at this time. Needless to say it wasn’t long before she was in financial difficulties.

By 1907 the mine owners had decided to build a new hospital and hired Annie to be the administrator. The small hospital had only 13 beds. Problems arose when the owners wanted the hospital to be used only for miners. Even the miner’s families were not to be admitted. Over 80% of the population at this time were men, with most of them being miners. As families had large numbers of children, women were a small minority.1 The nurses continued to visit many in their homes, as the hospital could not accommodate many who needed care and there were no facilities for women at all.

In the summer of 1908 Annie youngest son Raymond, aged 13, was diagnosed with epilepsy. In the early 1900s epilepsy was considered a mental health illness and many were sent to asylums. Raymond spent a year and a half in a hospital in Woodstock, Ontario – a hard two to three day trip each way for his parents to visit him. I imagine Annie was unable to visit him often. It was only two years after she had moved to Cobalt from Warwickshire, and it must have been heart breaking to have to send her youngest son away. The drama in Cobalt was by no means over, however.

1 To clarify this point, in 1909, there were only 36 women belonging to the Cobalt Presbyterian Church in a town of several thousand.