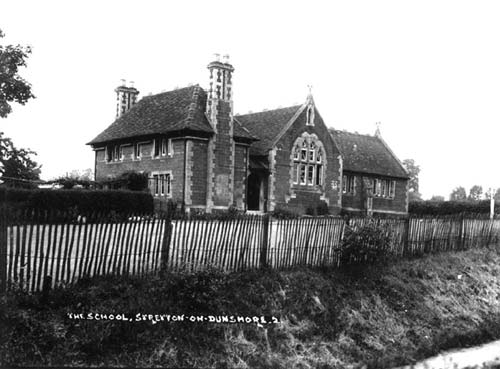 Stretton School which was originally built during the Imperial period. It is situated in School Lane, Stretton on Dunsmore.

1 In 1786 a case was laid before Sir Pepper Arderne, the Attorney-General, inquiring whether a part of the rents arising out of lands in Shilton, given by will of 15 August, 1694, by William Herbert, for the good of the inhabitants of Stretton on Dunsmore, might be applied towards the support of a school. He gave his consent; a school was established, and remained one of the objects of the charity.
2 The school set up by the trustees of the charity, opened on Ladyday in 1789. It was enlarged by one Proctor in 1796 “to teach eight poor boys reading and writing.” The site of that school as shown on a map on the porch of All Saints Church as being at SP41 72, now cottages.
The new school building was opened on 24th July 1861, and a log book was kept by the school masters thereafter.
In 1879 there were 100 boys and girls on the register, and non-attendance was decreasing. In 1891 the education became free. In 1903 the school ceased to be managed by the trustees of Stretton Charities and was taken over by the Education Committee of Warwickshire County Council.