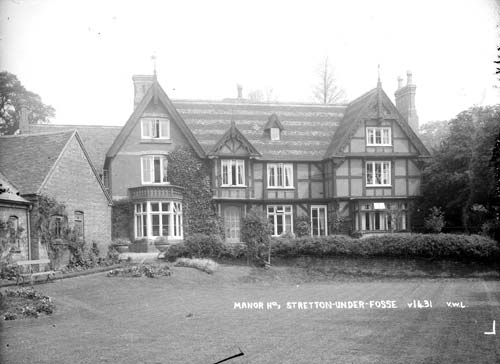 Stretton Manor House which was built during the Imperial period. It is situated north of Main Street, Stretton Under Fosse.

1 The building at this location is marked on previous editions of the OS map as “Manor House”: No other documentation pertaining to this fact could be found.
2 The present owner knew nothing of its history, thinking it to be c.150 years old. The house is timber framed with brickwork (nogging) on sandstone ashlar base: the roof is tiled (partly with fish-scale tiles in alternate rows) and crest tiles. The SE face has four bays, the two end ones projecting and second right recessed. W bay has three storied (including attic window in the gable), with modern bay window: 2nd left bay contains a front door (of ornate wood), with jetty and window in gable above: 2nd right bay has 2 storeys and E gable the same as on the west (with pronounced stone base and decorated large boards), the upper inscribed with “J-C 1862”. The exterior chimney is on the gabled east end, it has a stone base with blue brick upper and a number of miscellaneous brick built out-houses attached to the western end. There are also stables in the grounds.