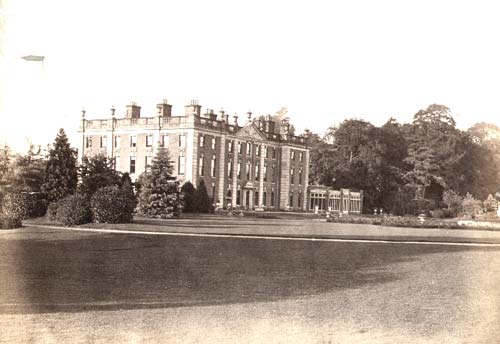 Newbold Revel, a manor house that was built during the Post Medieval period. It is situated 800m south east of Stretton Under Fosse.

1 Built for Sir Fulwar Skipworth in 1716. On the strength of style Francis Smith of Warwick is assumed to have been the designer. The entrance (W) side is of eleven bays. The first and last three are slightly projecting wings. The recessed centre was filled in about 1900(?) by Edgar Wood. The original doorway, however, was moved forward. The house is of red brick with stone dressings and three storeys high. The quoins are of even length, a motif typical of the first quarter of the 18th century. The doorway has Roman Doric columns against rustication and a tryglyph frieze at the top. The windows have busy surrounds and brick aprons. The urns are original too. The S side is of seven bays, the garden side again of eleven, but of a different rhythm: two-seven-two. Also, it has a three-bay pediment and a special accent on the top-floor middle window, which is made round-arched. Wood added the colonnade.
2 House. Possibly by Francis Smith of Warwick. Brick, in Flemish bond with ashlar dressings. H-shaped plan.
3 The building is now engulfed by modern brick additions and adjoining buildings (including a chapel) around its northern end (mainly from when the building was owned by the Sisters of Charity of St. Paul as a training college). It is now owned by British Telecom and is still undergoing transformation.
4 The Newbold Revel estate in Warwickshire, listed in the Domesday book, was once owned by Thomas Malory, author of ‘Morte d’Arthur.
5 Photograph published 1978.
6 A watching brief was undertaken during demolition work at Newbold Revel House. It had been suggested that several buildings being demolished in the complex were associated with the area’s use by the military during World War II. Unfortunately the area had already been cleared when a visit was carried out. The buildings had obviously been 20th century in date but no certainty could be gained of a 1939-1945 date or use. Adjacent buildings appeared to date from the 1950s but may have been somewhat earlier.