You are here: Home>Locations>Stoneleigh>Stoneleigh Bridge 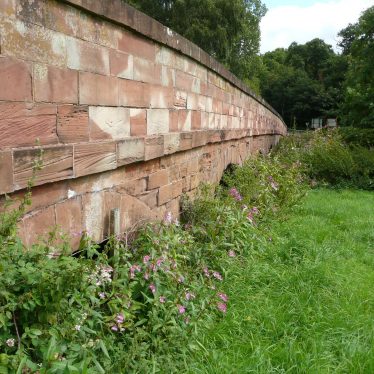 Bridge over the Sowe at Stoneleigh. 2017.
Image courtesy of William Arnold 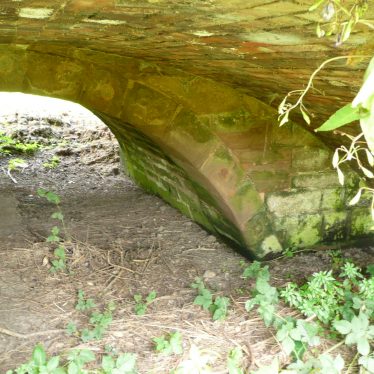 Underneath the arches of Stoneleigh Bridge, 2017.
Image courtesy of William Arnold 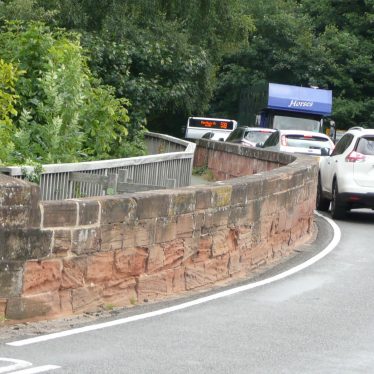 Stoneleigh Bridge, the remains of a Medieval road bridge, built of red sandstone, and widened in 1844. It is situated 200m northeast of St Mary's Church.

1 Stoneleigh Bridge retains, on its upstream side, much of its Medieval construction of local red sandstone, but the downstream side was added in 1824 during widening operations. It has eight segmental arches, is 59.5m in length, and was originally 3.7m wide (its present width is 5.5m). The original side has massive cutwater piers with unusual flat triangular cappings. Like Stare Bridge it has only two arches over water. Otherwise there is no likeness, but it was possibly rebuilt in 1635 (when it was reported as not repaired) and its circular arches confirm this.
5 Long narrow Medieval bridge, widened on S side in early 19th century by John Rennie. The early 19th century portion is in red sandstone ashlar, and of eight elliptical arches (the E three span the river and five flood water arches on W bank of river). Half round cutwaters on S side.
6 Archaeological Observation at Stoneleigh Bridge of the laying of a water pipe revealed no structural remains of the bridge and little else of archaeological significance. The building rubble along the pipe trench, and the layer of dark greyish brown sandy silt loam and charcoal in the valve chamber, may represent layers of debris left when the bridge was widened in 1844.
7 Sowe Bridge – of 8 elegant segmented arches, of the early 19th century, by Rennie.
8 Archaeological Observation at Stoneleigh Bridge in Dec 1998. Five trial holes were designed to locate services and the extent of the double arch barrels. The trial holes revealed little about the structure of the northern, earlier part of the bridge. The tops of the vaults of the 1844 widening were located. No early road surfaces survived.