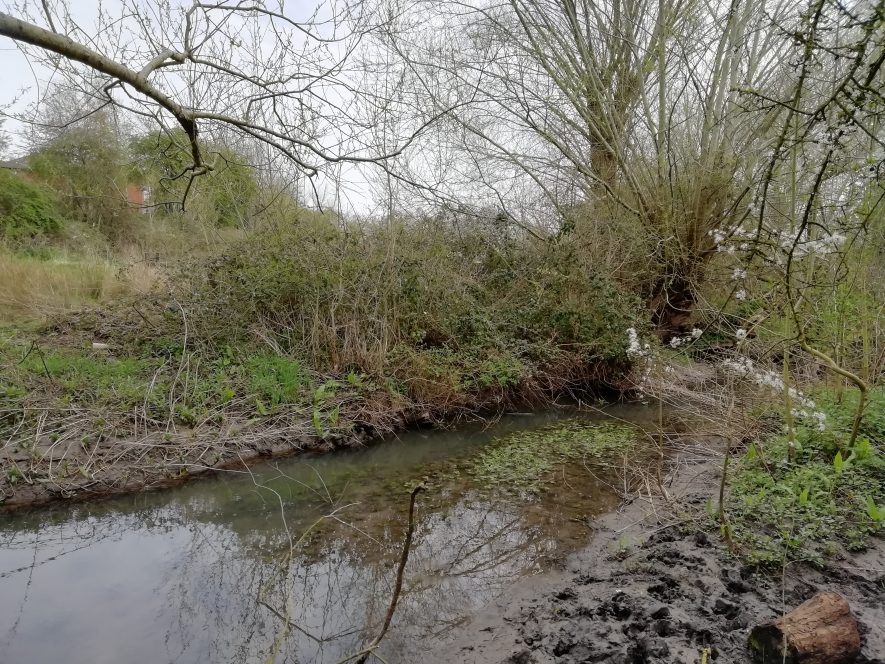 The site of Whitnash/Radford Semele Watermill which was built during the Medieval period. Traces of earthworks remain visible. It was situated 1km west of Radford Semele.

1 The mill is recorded in 1086 and was conveyed to Kenilworth Priory in 1325. The mill was mentioned again in 1653. On Beighton’s map of 1725 there is a site marked ‘Old Mill’ at the above grid reference and this is probably the mill in question.
2 The mill is also recorded in 1279, when it was held by Geoffrey de Simely.
3 Site of Mill Dam Field illustrated on Tithe Map, atlhough the Mill is not named.
4 There is no indication of a mill pond or any buildings.
5 A site visit to Mill Dam field showed fairly substantial earthwork remains situated next to the brook roughly halfway up the field. The earthworks represent the remains of a watermill and mill pond.
6 History of the mill.
7 Plan of the earthworks.
8 Plan of possible mill site and extent of the great pool and leat. There appears to be an ancient watercourse leaving the brook a short distance north of the bridge. This feature is present as a shallow depression, running northwards until it is cut off by the dam. This site appears unusual in that development ceased over 300 years ago.
9 An archaeological evaluation of land on the site of Whitnash Medieval mill pool comprising trial pits and an auger core survey demonstrated that a proposed stormwater storage pond associated with a new housing development is unlikely to damage sensitive archaeological deposits associated with the mill or its pool. Thick flood deposits were found, and these may be protecting archaeological remains of the mill race.
10 Articles in the press about the proposal for a nature reserve by the Whitnash Society.
11 Plans produced by the Whitnash Society.
12 Photograph.
13 Information of the Mill Dam area from documentary sources.
14 Correspondence from 1994.

Linkedin
More from Whitnash
More from Mills
More from Windmills, Watermills and Cornmills