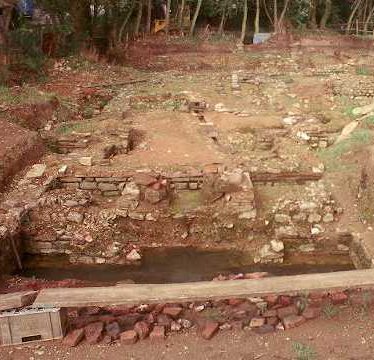 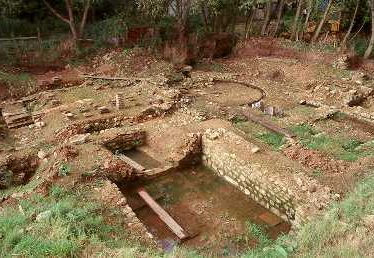 The site of the small Roman town of Tripontium. The town was in existence between the 1st and 4th centuries AD and probably had its heyday in the 2nd century AD. Excavations have taken place at the site since the 1960s. Tripontium is situated 1km south west of Shawell.

1 The field to the N of Cave’s Inn has yielded various traces of Roman occupation. Elias Ashmole in 1657 recorded much Roman brick and tile and that many Roman coins had been found here. M H Bloxam in the 19th century recorded various finds, most of them occurring in the course of gravel digging. These included brick and tile, glass, a rubbish pit rudely steyned with boulders, much pottery, a bronze brooch, rings and stylus and three coins of Nerva, Pius and Faustina the elder. Haverfield noted frequent fragments of pottery and brick in the gravel pit and the fields on both sides of the road. The Antonine Itinerary mentions a ‘station’ on Watling Street called Tripontium, and the distances given fit this site. The name is Latin and means ‘Three Bridges’ or the ‘Bridge with Three Arches’.
2 Apart from slight early work by Rugby School systematic investigation was not made until 1962 when the Rugby Archaeological Society commenced work. The site abounds in gravel which has been excavated for centuries and is still being removed, hence a great deal of settlement was destroyed prior to 1962. The E and N extremities were identified, the W and S are not known. The full size of the settlement appears to be at least 800m in length and 152m each side of Watling Street. The period of occupation is late 1st century to late 4th century with a peak in the 2nd century and a recession towards the 4th century. A large defensive ditch of 4th century date exists within the settlement. Most of the buildings were of timber with clay footings. One stone building with wing rooms and a bath house was found.
3 The ditch of the defensive enclosure produced much pottery and appeared to be deliberately filled a short time after digging. The pottery is largely residual, but some sherds appear to be early 4th century.
4 A large amount of 2nd century to 4th century coins was recovered from the site of Tripontium.
6 Scheduling information.
7 Archaeological evaluation (EWA7311) adjacent to and within the Scheduled area of Tripontium Roman Station demonstrated that post-medieval gravel quarrying was extensive across the whole area of the evaluation. Small areas of natural sand and gravel had survived, however, no earlier archaeological remains were present. A quantity of redeposited Roman finds, including pottery, tile and a fragment of quern stone were retrieved, perhaps derived from Roman deposits that had been destroyed by the quarrying.
8 Early scheduling record.
9 Letter from 1951.
10 Correspondence from 1953.
11 Planning application letter.
12 Newspaper cutting of discovery of RB defensive ditch and associated finds.
13 Article in journal.
14 Report in newspaper about the excavation of RB well and the associated finds.
15 Newspaper cuttings about RB milestone with inscription found in a RB well.
16 Drawings.
17 Soil contexts and pollen samples from 1963.
18 List of fifty finds.
19 Letter from 1967 about finds from the site including a circular perforated pebble.
20 Rugby Archaeological Society report from 1967.
21 Letter about conservation of well beams, 1970.
22 Rugby School report 1975-6.
23 Notes.
24 Duplicates of OS cards SP57NW15. Nos 1-5.
25 Letter from the DoE about proposed work.
26 First Interim report.
27 Second Interim report