You are here: Home>Locations>Rugby>Site of stocks, Sheep Street, Rugby 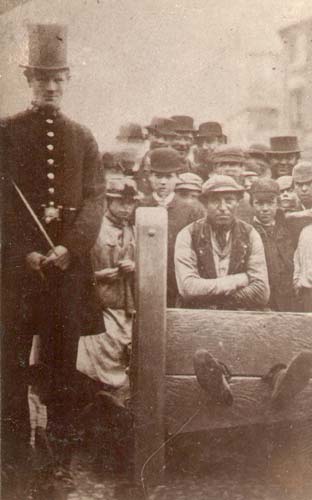 The last man in the stocks, when they stood in Warwick Street, Rugby
Warwickshire County Council
Description of this historic site

The site of the stocks, a wooden structure in which offenders' hands and feet were locked as a punishment. They date back to at least the Imperial period. The stocks were located on Sheep Street, Rugby.

1 The printing office of “The Meteor” is on or near the site of the town prison…whilst a few yards westwards were the stocks…in no infrequent use some 50 years ago when the construction of the London and Birmingham Railway was being carried on.
2 This may be the same position as “behind the shambles in Sheep Street but were previously on the site of what is now Frosts.”
3 Wait says the stocks were “behind the shambles but they were subsequently removed to Warwick Street, near the old fire engine house and lock-up”…”and have found a resting place in the possession of R.H.Wood esq JP.”
4 Some of these positions could not be located. At those that could, there was no sign of either stocks or lock-up. The NGR refers to the shambles in Sheep Street.