You are here: Home>Locations>Long Itchington>Site of Romano-British or Early Medieval Settlement or possible palace at Snowford 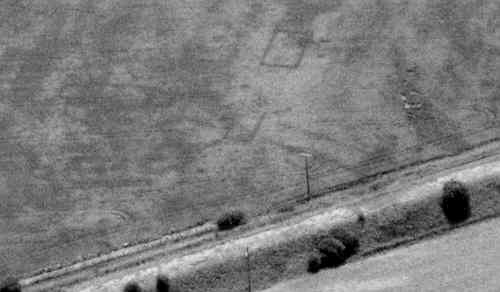 The site of a settlement dating to between the Roman and Early Medieval period. It is known from cropmarks of enclosures and linear features which are visible on aerial photographs. The cropmarks are similar to those of Saxon Palaces. It is located 800m north east of Snowford Bridge.

1 Small rectangular buildings and linear features show on air photographs.
2
3 The site has no immediate parallel and is difficult to date because of the paucity of surface finds.
4 It has been suggested that these represent a Romano British villa consisting of a central group of buildings with a SW aspect set around a courtyard and with five or six adjacent buildings. Surface finds are limited to less than twenty fragments of tile ‘which suggest that the site is well preserved’.
5 The site is not convincing as a villa and is far more reminiscent of a series of Anglo Saxon timber halls (see Hatton Rock, PRN 960). Crop marks would appear to be positive rather than negative (indicating ditches rather than walls). As at Hatton Rock small timber buildings are set in rows. One of the Snowford buildings is at a right angle to the main alignment and appears to have annexes at one or both ends. The lack of surface finds from Wilson’s survey is also significant as, if the site were an extensive villa-complex, ploughing should have produced tile, stone and pot whearas AS sites typically produce very little.
6 Letter from 1959.