You are here: Home>Locations>Luddington>Site of Roman Villa 1km W of Luddington Church 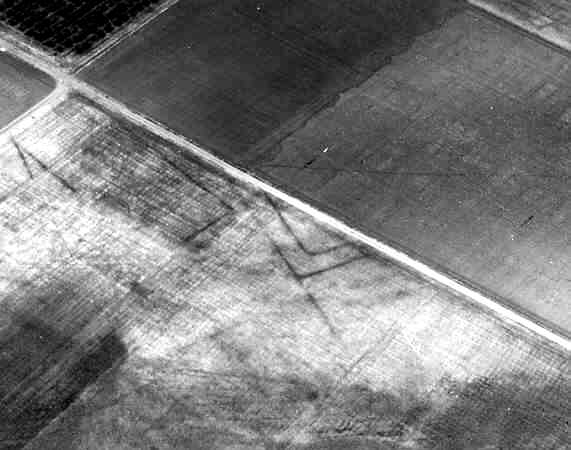 A Roman villa, partially visible as a cropmark to the north of Weston on Avon
WA Baker
Description of this historic site

The site of a Roman villa known from aerial photographs and from finds of Roman pottery collected over many years. It is located 400m north of the church, Weston on Avon.

2 Group of enclosures and linear features show on aerial photographs.
4 Romano British drain found. 1955: Coin found, Constantinian. Romano British pottery found over area of 1.7 to 2 ha – dated to 2nd century AD.
5 Site lies on second terrace gravels with a S aspect. Farming operations some years ago revealed what was assumed to be a field drain of Roman date. Pottery sherds have been picked up for many years, together with roof tegulae, floor and flue tiles. Sherds noted during a visit included large quantities of Severn Valley Ware, 2nd century mortarium, 2nd century Samian, Oxford colour-coated ware, carbon-coated ware and Nene Valley ware. The site appears to be that of a fairly sophisticated native farmstead.
6 Three Roman coins found on the site.
7 Evaluation to the south of the cropmark complex interpreted as a villa site. An apparent trackway feature was identified, as seen on aerial photographs extending across this area. The ditches had been re-cut, showing the use of this trackway over a significant period. No datable features were located.