You are here: Home>Locations>Temple Grafton>Site of Roman Settlement 500m W of Welford Church 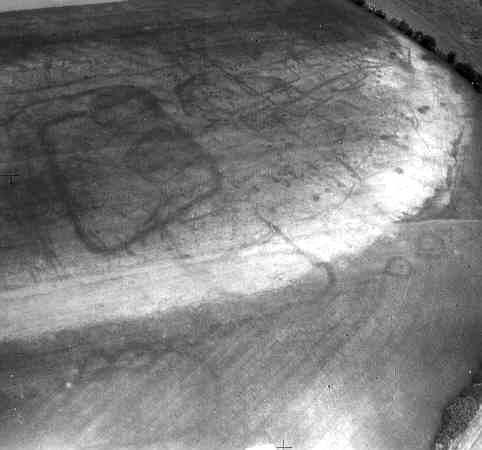 The possible site of a Roman settlement. Enclosures and linear features are visible as cropmarks on aerial photographs and Roman pottery has been found at the site. It is situated 500m north west of Welford on Avon.

2 Enclosures, linear features and penannular gullies show on aerial photographs. Morphologically these marks are probably of Roman date.
3 Grey shelly ware, fragments of ‘Glevum ware’, three sherds of Samian – one rim, black-burnished, roof-tile, ?tegula. Plateau with all finds spilled over towards river. Hard red mortarium and part of a lid held by Peter Russell.
4 Letter in Birmingham Museum records that sherds were picked up on the E boundary of the field and that a proper investigation was impossible. There are also some large blocks of stone. On the other side of the hedge in the meadow are a series of irregularities, small mounds and hollows, occupying an area about 22.8m long and 9.1m wide on the crest of the slope leading down to the river.
5 Scheduled as Warwickshire Monument No 155.
8 Site no 50 in survey.
9 Correspondence from 1972.
10 Note.