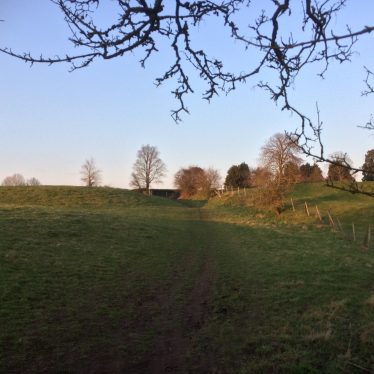 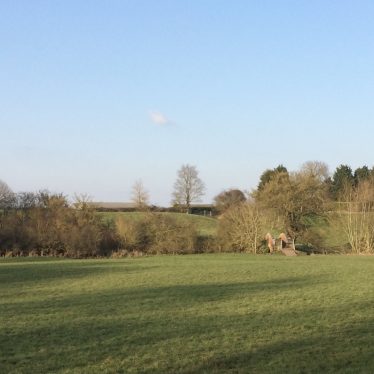 Southern ramparts and village, looking north at a distance from the footpath from Hunningham
Image courtesy of Johnny Fenton. 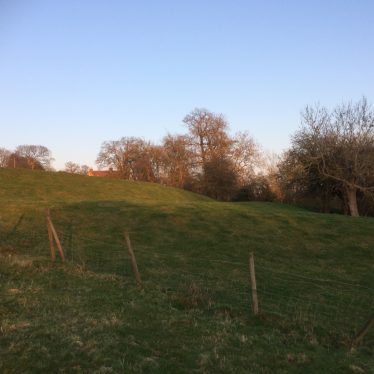 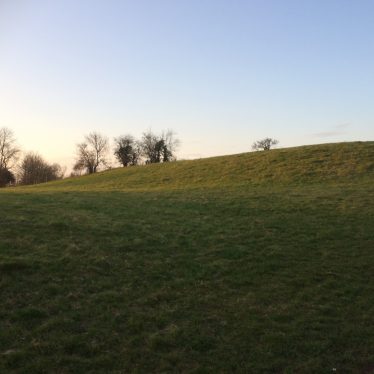 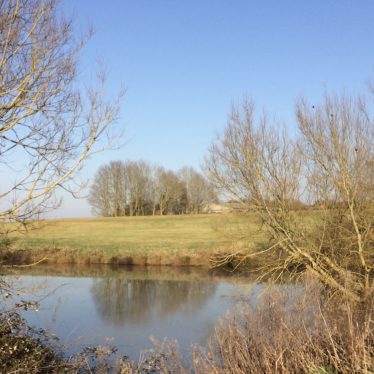 Western bank across from river-fed pond
Image courtesy of Johnny Fenton.
Description of this historic site

The site of a possible hillfort, possibly dating to the Iron Age. Ditches and ramparts are still visible as earthworks in places. The site is located at Wappenbury.

1 The village was formerly well-nigh enclosed by extensive entrenchments enclosing an area of about 6 ha. The earthworks are now much denuded and altered in form and are almost indistinguishable in places. On the E side of the village no remains whatever are shown on the OS 1:10560, but a plan made 60/70 years ago (in Rugby Library) shows an earthwork on this side. The interior of the camp is raised above the neighbouring ground level. Traces of a bank exist on the N and W side, although the ditch has probably been filled up. It has been suggested that the works are Roman, although no certain discoveries of antiquities are recorded.
2 The fort is close to two river fords and is protected on three sides by streams. It is an irregular rectangle with NE and SW corners truncated and the rampart almost ploughed out on the E, while the S has been destroyed by the river. The ditch is only visible to the E and, for a short section, to the SW. There are ?modern causeways to the N, E and W. There is an entrance at the SW where a deep, narrow, inturned entrance faces a break in the ditch. A section across the N rampart and ditch. This indicated a clay revetted bank sealing an occupation layer. Outside this was a ditch. The silt of the ditch contained quantities of Roman pottery wasters (PRN 5507). A long period of further silting was followed by the overthrowing of the rampart, probably followed by farming activities in the 13th century. Pottery from the occupation layer under the rampart included pottery with ‘Belgic’ influence. Other finds included a spindle whorl, an oblong bone dice, a bone weaving spear and a bronze object.
4 The E rampart is quite small and falls amid Medieval and later disturbance. On the SW side the ditch is visible as a slight berm.
8 The site occupies a prominent position on a natural knoll. The defensive earthworks include intermittent traces of a single rampart and a ditch that has been mostly infilled. Along the northern edge of the site, the rampart is visible as a distinctive break in slope and is thought to have been levelled by ploughing. The asssociated ditch has become infilled but it can be traced as a slight depression and will survive as a buried feature. The western edge of the site is defined by a scarp bank, marking the location of a rampart which remains visible at the northern end of the scarp. A break in the western bank is thought to be part of a drainage channel. The best preserved section of the hillfort’s defences is situated along the eastern edge of the site, the ditch is visible as an 8m wide depression. The rampart is visible on the ground but in a reduced state.
9 Archaeological recording during the construction of a dwelling and garage established the position of and entrace way into the ditched enclosure. A foundation trench was hand dug through the end of the ditch, producing an assemblage of Iron Age and early Romano-British pottery. Description of pottery.
10 Described as an Iron Age settlement and a Romano British settlement, but not as a hillfort.
11 Correspondence about demolition and building at the site.
12 Correspondence from 1998.
13 Early undated discussion of the vulnerability of the site.
14 Letter from 1977 about a planning application.
15 Correspondence from 1977 about agricultual threat to the site.
16 Correspondence about a planning application in 1978.
17 Letters about unauthorised ploughing.
18 Discussion of the difficulties of dating the ‘Belgic’ pottery found by the Stanleys at Wappenbury. Re-evaluated in 1987, much of this pottery would seem to give a terminus post quem for the ramparts of early Roman date.