You are here: Home>Locations>Kineton>Site of Roman Settlement 300m E of Banbury Road Fm 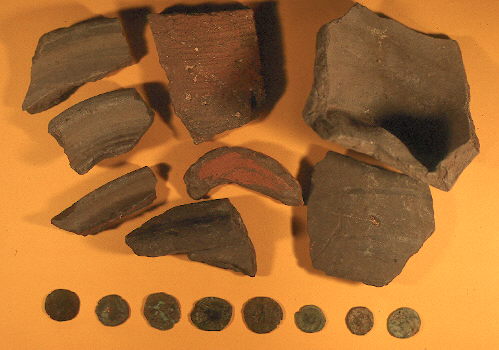 Roman pottery and coins from a site near Banbury Road Farm, Kineton
Warwickshire County Council
Description of this historic site

The site of a settlement dating to the Roman period. It is known from finds of pottery and coins, but also stone which appears to represent former buildings.

1 Four Constantinian coins and a coin of Claudius from a field called Bankey Meadow.
2 1950: The site covered a number of fields and pottery, stone and bone were recorded. Coins have been found but these have been disturbed. A number of coins are recorded from the site including coins of Claudius II, Tetricus II, barbarous imitation of Tetricus I, Valentinian I and three of uncertain denominations.
3 Field work was conducted on the site in 1985. Ten individual stone scatters were recorded; all appear to be building plots, including one which was richer and larger and contained much brick and tile. This larger scatter also included fine wares, the spout of a bronze ‘patera’ and amphora fragments. The other stone scatters are strung out in two parallel lines, as if fronting onto a street. The standard of finds is not so high: colour coated wares, Severn Valley ware and grey wares predominate. Among a pile of stones removed from the site during ploughing was the bottom stone of a rotary quern and various other pieces of burnt stone. The field to the N was under permanent pasture. However, the farmer has dug up coins, a fibula, mortaria, Samian etc while digging drains.
4 Field survey. Ten probable buildings in field indicated by stone scatters. In some cases tile, pot, stone slates, burnt stone are associated with these probable buildings. Scatter 1 had flue and roof tile with much Samian ware.
5 A further 44 3rd-4th century coins and a Dolphin brooch were identified in 1985. These coins were borrowed from and returned to the farmer.
6 Finds from the site in 1985 were identified and included sherds of mortaria, Samian, Nene Valley colour coated, Oxfordshire colour coated, Fabric 6 storage jars, black burnished, shell-gritted and various other fabrics and one spindle-whorl cut out of a piece of pot.