Site of Manor House at Orig. Site of Cookhill Prior, Spernall. 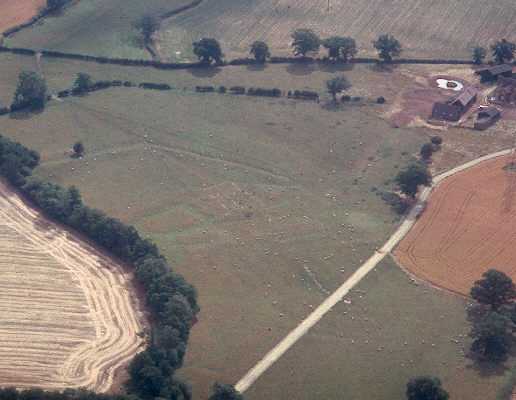 The site of a Post Medieval manor house. All that remains is a platform, possibly surrounded by a moat. The site can be identified from aerial photographs, and remains visible as an earthwork. It is situated 350m north west of Morgrove Coppice, Spernall.

1 The chapel of St Giles, which may have been the original church of the Priory, was granted with others of its lands, to Thomas Broke in 1541 and to Nicholas Fortescue in the following year. It had probably by then been converted into a farmhouse, since in 1547 Thomas Broke was occupying the ‘messuage or chapel of St Giles called Saint gyles chapel in Sparnall’… John Fortescue received a grant of the ‘messuage and chapel called St Giles’s’ in 1663. The present farm-house of that name is modern.
2 Earthworks are visible on air photographs.
4 The priory was moved to Cookhill in Worcestershire by 1400. By 1547 the buildings had been replaced by a farmhouse and this farm is also refered to in the 17th century. An estate map of 1695 shows the farmhouse standing on the edge of a moated platform some distance away from the present house of St Giles. Earthwork features are well preserved on this site. The most prominent is a raised platform which may once have been moated, the moat represented by a wide ditched feature preserved on the S and E of the platform. This was dry in the 17th century. The platform is about 60m across and bears traces of ridge and furrow. The 16th century house, which appears from the map evidence to have been substantial, stood on the W edge of the platform. Charcoal and stone rubble have been located on the site. Additional earthworks may represent other priory buildings.
6 This site has now been scheduled (SAM 21509).

Linkedin
More from Spernall
More from Buildings and Structures (Parks and Gardens)
More from Farm Houses, Cottages and Manor Houses
More from Moated Sites
More from Ridge and Furrow