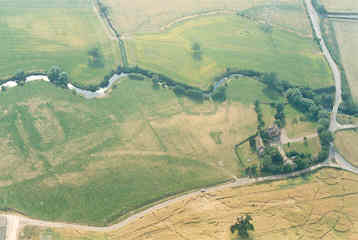 The site of an area of shrunken village at Spernall dating from the Medieval to the Post Medieval period. The remains of the village are visible as earthworks. Medieval pottery has been found at the site during archaeological work.

1 1195-1361 the village was largely depopulated by pestilence, so that many villein tenements came into the hands of freemen.
2 The village consists of the church (PRN 549) and rectory and a few scattered houses.
3 Minor disturbances evident in the field to the S of the church, bounded by ridge and furrow, probably marks the site of the village before migration to the present site, ribboned along the road eastwards from the bridge.
4 The main village nucleus developed around the church. Raised platforms to the SW of the church which were subsequently ploughed over may represent an early settlement site. A platform leads into and between the platforms terminating at the river. Some Post Medieval houses survived on the site (PRN 6122).
6 Revived as a hamlet of tenant farmers, working small holdings, and lasted until the 18th century.
7 A geophysical survey (as part of an evaluation, see reference 8) identified anomalies which coincided with visible earthworks.
8 An archaeological evaluation was undertaken by Warwickshire Museum of land required for a new bridge and realignment of the highway at Spernall Bridge. The evaluation identified medieval settlement remains which included probable settings for a Medieval timber framed building. A large quantity of pottery was also recovered, mainly from a layer within evaluation trench 3.
9 Listed in Domesday, in Ferncombe Hundred. The Phillimore edition has a grid reference of 08,62.
Ref 29,4 (Land of William Bonvallet) Hugh holds 2 hides in Spernall from William. Land for 4 ploughs. In lordship 1; 4 villagers and 7 smallholders with 3 ploughs. A mill at 4s and 7 sticks of eels; meadow, 8 acres; woodland 3 furlongs long and 1 wide. Value 40s.
10 Correspondence from 1988 with the owner of Upper Spernall Farm.
11 Notes relating to 10.
12 Portable Antiquities Scheme find provenance information:
Date found: 1997-01-01T00:00:00Z
Date found: 2001-09-30T23:00:00Z
Methods of discovery: Metal detector