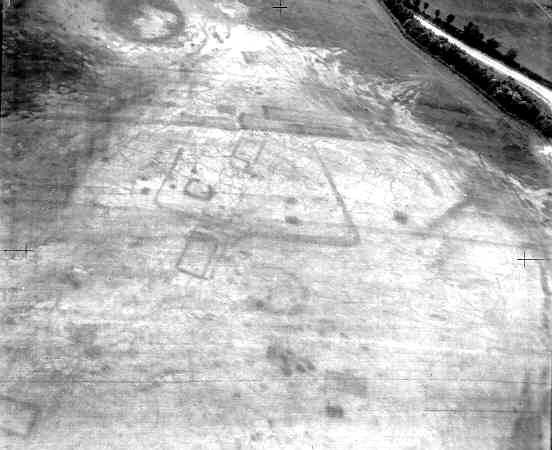 Linear features are visible as cropmarks on aerial photographs. Subsequent excavation and radiocarbon dating have confirmed that this is an Anglo Saxon settlement, possibly a palace, dating to the Migration period. It is situated 500m north east of Boscobel.

1 Various air photographs.
2 Possible Saxon palace site of 2-3 ha in extent on the S end of a spur overlooking the Avon. Two charters of 781 exist. Information on Hampton Lucy, Ingon and Wellesbourne may indicate that this was a large royal estate which gradually diminished in the 8th century. Two phases may be indicated from cropmarks. Each phase consists of a group of rectangular buildings, presumably of timber, and an L-shaped ditch, or timber alignment. In each group there are three or more buildings in a line. Most of the buildings are too large to be part of an ordinary settlement. They are halls similar to those at Yeavering and Cheddar. The palace could date to the period of Mercian supremacy in the 8th century.
3 Rahtz suggests two phases for the building. He refers to resistivity survey and proton magnetometry. The magnetometer survey was more successful than the resistivity, and results are reproduced. It didn’t add much to the work done on aerial photography. He suggests two phases: they are not necessarily chronologically discrete, but may represent a first phase that was abandoned, and then stone built buildings replaced them. An interpretative plan is produced, which suggests a ring ditch and pit group as well as the building complex (see MWA6075).
4 1970: A pipe trench was cut across the site and a number of features were observed. Pottery and other finds confirm a Saxon date. Feature 1 could have been part of a small square building, probably a grubenhaus, 2 part of the L-shaped ditch. Feature 14 may have been part of a church (PRN 6292). Other features included post holes and timber-slots. Finds included animal bones, hand-made pottery, daub and plaster. The pottery and bone tools date the site to the Saxon period. A radiocarbon date of AD 875 +/- 88 (corrected) was obtained. This could have been an episcopal or royal residence which passed into the hands of the Bishop of Worcester.
5 Early scheduling record.
6 Three large rectangular buildings on axial alignment, two showing structural alterations. Two of these buildings, together with other features, lie within a ditched enclosure. A circular structure and at least one other building lie outside the enclosure to the north. In 781 Offa confirmed to Bishop Hathered of Worcester 17 hides in this area.
7 Finds accessioned into the Museum.
8 Transcription of features. Undated.
9 A number of the buildings show up well as cropmarks on 2007 Aerial Photographs.
10Transcription of the features visible on 2007 Aerial Photographs. The 1970 pipeline trench – see 4 is clearly visible and appears to never have gone through the key buildings at the site. It does go through a sunken featured building (grubenhaus), as suggested in the pipeline report. The GIS layer was adjusted to accomadate the full range of buildings from the transcription, including buildings further north. This transcription probably represents a better version than 8.
11 Mentioned in an article on the use of prehistoric monuments within Early to Middle Anglo-Saxon settlements. This suggests the settlement might have been laid out in respect to the barrow (see MWA6075), which may have survived as an earthwork at the time.