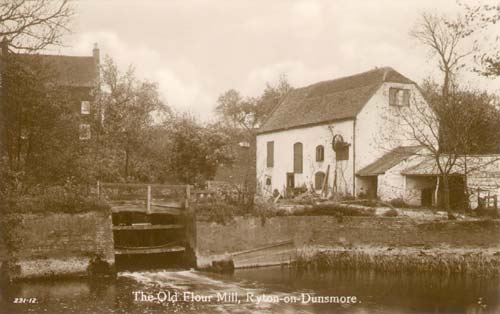 The site of Ryton Mill, a watermill that dates back to the Medieval period. It was later used as a fulling mill, a mill for beating and cleaning cloth. It was situated 500m south west of Old Hare Covert.

1 There was a fulling mill at Ryton-on-Dunsmore in 1621.
2 There was a mill at Ryton in 1086. It seems likely that the mill was used for fulling in the 17th century. On Beighton’s map (1725) it is marked as ‘Gig Mill’. Details of ownership exist for the 19th century. One small outbuilding is all that remains. The major part of the building was destroyed by fire in 1963 having been severely damaged by vandals before this. The short headrace to the wheel has since been filled in but the main river sluice gates still stand close to the site.

Linkedin
More from Ryton on Dunsmore
More from Mills
More from Windmills, Watermills and Cornmills