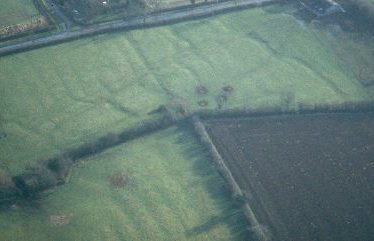 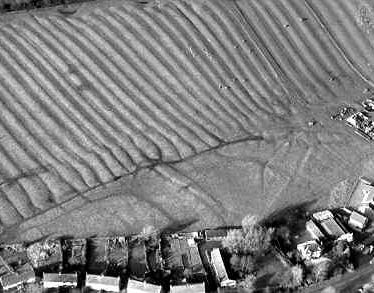 The possible shrunken village, with ridge and furrow earthworks, at Priors Marston
Warwickshire County Council
Description of this historic site

The possible site of a Medieval shrunken village at Priors Marston. The remains of the village are visible as earthworks, including several house platforms. The site lies to the north of Priors Marston.

1 A 4.2 ha field containing a complex of earthworks. Known as Bury Yard. The field is close to Priory Farm and the name of the farm and field may indicate that this is the site of the Prior of Coventry’s manor house. The earthworks spill over into adjacent fields, but are nowhere as clear as in Bury Yard. The main features in Bury Yard are a number of house platforms adjoining the farm approach road and S parallel lanes running down to the stream. The site does not seem to be documented.
2 Plan.
3 Field ploughed Spring 1977. The Spencer estate map of pre-1758 shows ten buildings in this field. Before ploughing, land drains were laid at a depth of 0.7m and some sherds of Early Medieval pottery were thrown out. When ploughed, four patches of building stone were revealed and seven sandy patches, which probably represented the buildings shown on the Spencer map. The pottery finds ranged from 17th to 19th century.
4 Map.
5 OS card.
6 Information about two fields; Sheep Yard and Bury Yard.
7 Letter with observations about the site.
8 Plan referred to in 7.
9 Plan of the same area drawn in March 1977 at the time it was ploughed.
10 Letter requesting information about early medieval sherds at the site; unanswered.
11 Polygon edited, based upon cropmarks visible on https://local.live.com.
12 Please note; this record is duplicated by MWA6203.
1314 Area extended to the west to incorporate a number of earthworks visible on Google Earth imagery, c.1999. These earthworks were identified by the AOC Assessment of Local Services Villages for Stratford-on-Avon District Council in 2012.