You are here: Home>Locations>Warwick>Possible Iron Age Hillfort at Priory Park 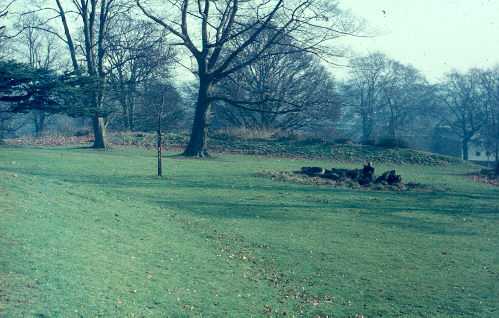 The site of a possible Iron Age hillfort. It survives partially as an earthwork. It is situated in Priory Park, 200m east of the Cape Industrial Estate, Warwick.

1 Possible hillfort. Priory Park. Ramparts in places triple, apparently enclosing crest of hill, about 1.8 ha. Under examination (1971-2). A possible Iron Age enclosure comprising a series of massive ramparts. It has usually been assumed that these were raised when the ground was landscaped in Post Medieval times, but Webster has drawn attention to the fine strategic position. At the time of writing (early 1972) W Ford is investigating the area by trial trenching as the opportunity arises, but the evidence of date or purpose has not yet been established.
2 A section across one of these earthworks positively indicated that this was not a hillfort.
3 The prominent section and ditch on the east side of the site appears to correspond closely to the edge of a belt of ornamental woodland shown on a plan of 1711 and while it is possible that this followed a pre-existing boundary, it is perhaps more likely that the earthworks were the result of 17th century landscaping. Certainly they do not seem to continue to the west, beyond the area of landscaping.
4Examination of Environment Agency lidar does not show any positive traces, even slight, that might suggest a hillfort. This does not totally rule out the possibility.