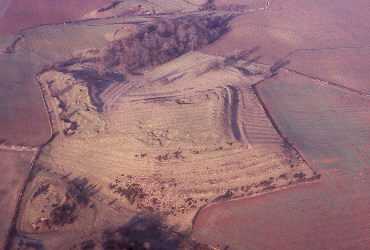 The site of a possible hillfort which dates to the Iron Age. The earthworks of the ramparts are visible on aerial photographs and it is located 1km south west of Fenny Compton.

1 One of the spurs of the Burton Dassett hills, called Gredenton Hill, has its steep sides scarped into a series of artificial terraces. These terraces have every appearance of being the remains of ancient entrenchments which once encircled the summit of the hill, and which have been reduced by weather and the action of the plough to their present condition. The top of the hill is in a strong and commanding position and two little streams that run at the bottom of valley cuts on either side of the site probably once added to its natural defences.
2 A camp following the outline of the flat top of the hill, with lynchets down the slopes of the NW and SE sides. The SW side has been much disturbed by quarrying operations.
3 The air photographs are most impressive, but on the ground it is evident that the whole pattern is due to a combination of ridge and furrow, plough headlands, quarrying and soil-creep: and that there was never a hillfort.
4 Two flat terraces circumvate the hill on the E and N sides, but peter out on the other sides of the hill. Some strips of richer grass may indicate the location of ditches. There may originally have been as many as 5 ramparts, but all have now been heavily denuded. There are traces of ridge and furrow on the slopes and even the top of the hill.
6 If this was a hillfort it appears likely that it was bivallate. On balance it seems probable that it is a hillfort.
7 SAM List.
8 Correspondence about the management agreement.
9 Correspondence with the tenant of Grange Farm about possible earthworks.