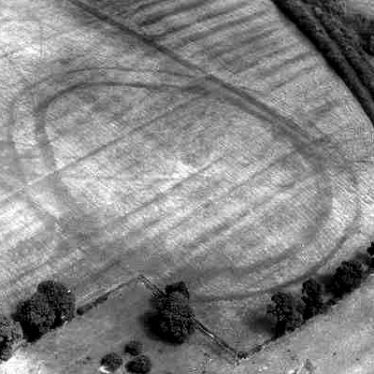 An earthwork, which is visible as a cropmark on aerial photographs it has been suggested as a possible Iron Age Hill Fort but is more likely to be a Neolithic Enclosure with Iron Age Features within it. It is located 600m south east of Thornton Wood at Ettington in South Warwickshire.

2 A large double ditched oval enclosure overlying a narrow rectangular feature (PRN 5202). It is suggested that this is the remains of a henge. Surface evidence of a semicircular stone scatter found after ploughing in 1978. The stone scatter is about 7.6 to 9.1m wide. Nothing is visible of the rest of the enclosure.
3 The stone scatter lies within the outer ditch. A number of sherds of Iron Age pottery were obtained, also a number of worked flints (PRN 5200), a small piece of copper and a piece of cremated bone.
4 The feature could be seen as a complete ellipse a few weeks after the survey had been completed. It is suggested again that it is a henge.
5 Air photo.
6 AM7 description.
7 SAM description.
8 It appears that the site is probably actually a hill fort as it is the wrong shape for a henge and appears to have a wide and defensive inner ditch with traces of an internal bank. The hillfort has a small annex on the SE and a possible entrance on the NE.
9 Plan of the site.
10 This site is not on a hill and consequently is probably not an Iron Age Hillfort, it may be a Neolithic enclosure with an Iron Age site within it.