You are here: Home>Locations>Chesterton>Moated Site 150m NW of Chesterton Church 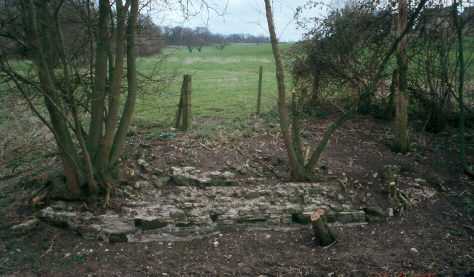 A moat, a wide ditch usually surrounding a building. It dates from the Medieval period, and stone foundations for drawbridges are still visible. The site contains fishponds and may be associated with a manor house. It is situated 150m north west of Chesterton church.

1 The published pond incorporates a moat at its W end.
2 Plan.
3 Site of Medieval moated manor clearly visible in the dip to the NW of the church. Stone foundations of two drawbridges can be discerned in the side of the moat (much overgrown). Manorial history described. In c1470 John Peyto rebuilt the moated manor by the church.
4 The moat is much overgrown, especially on the N. The stone bridge abutments were still visible.
5 Note in TBAS.
6 Part of the S of the moat has recently been filled in.
7 New Scheduling Information (was County No.106). The monument includes the buried and earthwork remains of the medieval settlement (WA 788/WA 6306), a moated manorial site (WA 790 and WA 6302) and fishponds (WA 6303). St Giles Church, the churchwarden’s cottage and the northern half of the church cemetery are totally excluded from the scheduling.
8 The moated platform was a garden feature which had bridges crossing over the moat with a pathway around the edges of the platform and a pond in the centre, now infilled. The foundations of a bridge over the moat were located on its west side. These were gradually becoming overgrown with trees. At ground level approximatly 30cm of soil had gradually slipped from the moat from the platform, covering wahat looks like a cobbled pathway, which encircled the pathway. The lower levels have survived remarkably well. Mortar bonding the stones together has survived intact. Sandstone blocks had been cut to shape and inserted in each north-south corners. The condition of stone work on the east bridge supports is good. A number of inserts cut into the stonework on the east supports were possibly for inserting timbers to support the bridge. There is no evidence of this being a drawbridge. Within the last two years, the north east end of the moat has suffered serious erosion from animals and the weather. This is exposing large cut blocks of limestone with layers of smaller pieces of limestone above and held together with mortar. Evidence of ceramic roof tile, pottery, glass and broken quern stone can be seen protruding from both sides of the bank which suggests the possibility of a building within the vicinity. Geophysics has disproved the existance of a building on the moated platform. A wooden sluice gate was found in the north west corner of the moated site as well as a stone drain.
9 Rabbit warrens across the site have produced medieval glass. They come from the demolished house, removed when the new one was built (see MWA791).