Medieval Church at Stretton on Dunsmore

Sketch of the original All Saints Church, Stretton on Dunsmore
Warwickshire County Council

Site of Medieval church at Stretton on Dunsmore 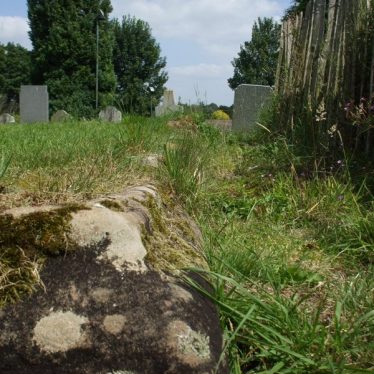 1 There is within this village a Chapel of All Saints, which had a Chantry therein founded by Thomas de Wolvardynton.
2 There is no mention of a chapel in the Taxatio, but the chapel and chantry are recorded in 1345 and 1378. The chantry was surrendered in 1545. Stretton on Dunsmore became a separate parish from Wolston in 1696. A view of the old church c1820 shows that it consisted of chancel, nave with S (and N?) aisle under one roof, S porch and wooden tower, a bellcote with pyramidal cap at the W end of the S aisle. The windows suggest a 14th century date for most of the structure, the porch being probably 18th century.
3 Isolated fragments of the old church are evident throughout the graveyard of the modern church which is dated 1837 – after which presumably the early church was demolished.
4 Little Medieval church can still be traced in the churchyard and much of its masonry is in the wall between the old vicarage and the Manor House.
5 A hollow in the graveyard indicates (perhaps part of) the site of the church, to the NW of the present church.

Linkedin
More from Stretton on Dunsmore
More from Chapels and Churches