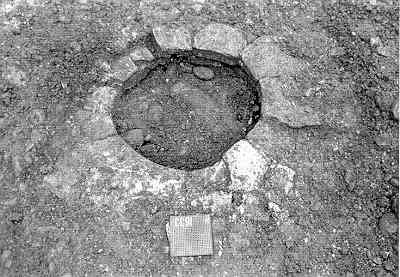 Excavation of a well, Coughton
Warwickshire County Council
Description of this historic site

Excavations at Coughton Court uncovered layers dating from the Imperial period. The features were related to the destruction of the east range and infilling of the moat, a former bridge over the moat, a garden feature and a leat.

1 A destruction level with 18th century material probably comes from the east range, which was demolished in 1780. Limestone blocks from the north wall are thought to have been re-used to build a bridge over the moat following the destruction of the reputed first floor bridge between the east range and the brewhouse, shown on a mid 18th century map. The moat was filled in 1786.
An area of cobbling with an ashlar stone block was found at the east end of the site that may represent a garden feature. South of this the line of a leat was picked up in a trench and as a crop mark aligned NNW-SSE. The latter cuts the line of the moat and thus is later than 1786.