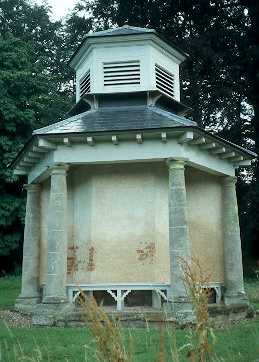 A game larder, an octagonal building in which game was stored. It was built during the Imperial period and is a feature of the landscape park at Farnborough Hall.

1 Deer Larder, in a brick walled garden to the left of the terrace. Octagonal with Tuscan columns around. In the louvre is still the wheel from which the game was suspended.
3 Building is in good condition and intact.
4 Game larder, c1750; probably designed by Sanderson Millar for William Holbech. Rendered brick walls and limestone columns; cupola of painted wood. Slate pyramid roof. Hexagonal plan.