You are here: Home>Locations>Alderminster>Ettington Park 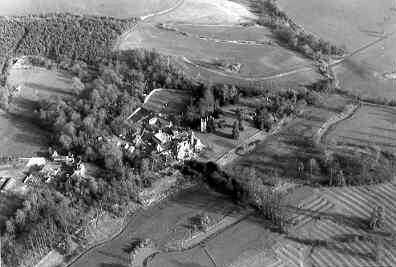 Ettington Park, a deer park dating from the Post Medieval period to the Imperial period. The deer park appears on a number of historic maps. It was situated to the south west of Ettington.

1 A deerpark is mentioned in Ettington in a lease of 1653, the park is also marked on a map of 1738. It was restocked with deer in 1762 and the present park contains 436 acres and 200 deer.
2 Noted.
3 The present park is much reduced, the parklands being used for the grounds of a hotel. The former parkland outside this area is now arable. Deer are no longer kept.
4 In the 1790s the village was moved and the church partly demolished. The present grounds are largely 19th century in character, though the old park survives to the south-east. Features include tunnels, shrubbery, parterre, walled garden, pleasure grounds with ha-ha/terrace walk, icehouse, loggia, ruins of church, kitchen garden, lakes, boathouse, lodges, drives, bridge. Recommended for inclusion on the Parks & Gardens Register.
5 Ettington Park preserves significant remains of 17th and 19th century deer parks and early to mid 19th century pleasure grounds. The village of Lower Ettington stood south of the manor house site, and was not fully cleared away until after the enclosures of 1795. There was already a deer park (Old Park), south-east of the house, by 1653, but it was limited in size: a 1738 estate survey records it as 28 acres. Features shown on the 1738 survey include a walled garden, canal and pond features, a dovecote and water mill. The new park was created in the 19th century and also covered an area north-east of the house, including the uplands of Greenhill Wood. Pleasure grounds south and west of the house were developed from 1795 onwards, and there is good documentary evidence of planting schemes in the early 19th century. A further estate plan of 1842 gives details of the layout at this time, which included an avenue, ha-ha, walks and shrubberies. A small formal garden was developed in the 1860s to go with the recased house; this included an early 17th century loggia brought in from Coleshill Park.
6 – 9 The OS 1:10560 1886 shows many of the park features.
10 – 13 The OS 1:10560 1906/1924 shows the extent of the park at that time as a shaded area.
14 1738 map shows deer park; 1795 map shows ‘The Park’ as an enclosure within a much larger ‘Old Park’. Sequence of Shirley estate maps shows stages in the extension of the pale. Greenwood (1822) shows the park, but it continued to expand after that date.
15 Map showing some stages in the expansion of the park.
16 Park shown on Greenwood’s map of 1822.