You are here: Home>Locations>Edstone>Edstone Hall 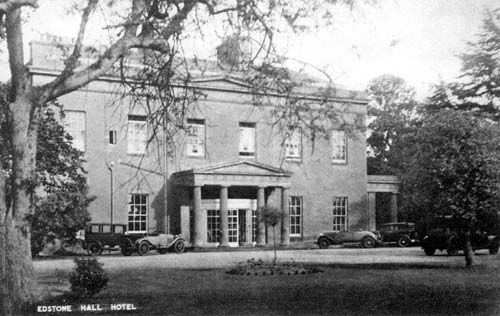 The site of Edstone Hall, a manor house and park dating to the Imperial period. Features of the park include a lake and boat house, drives and an icehouse. It is marked on the Ordnance Survey maps of 1886 and 1926 and is located north of Bearley.

1 H Mills is stated to have built the present Edstone Hall on the site of an old Manor House (PRN 1619).
2 Edstone Hall, c1800, has recently been demolished.
3 No remains of the earlier halls survive.
4 The house was rebuilt in 1936. Remains of parkland with ornamental planting survive. Features include lake, boathouse, drives, ice house, pleasure grounds, kitchen garden. Recommended for inclusion on Local List.
5 The OS 1:10560 1886 Sht 38NW shows the house, with a number of park features including the lake and ice house clearly shown. The grounds appear to contain an area north east of the house not shown as parkland in 1926.
6 The OS 1:10560 1926 Sht 38NW shows the parkland at that date shaded.