You are here: Home>Locations>Stockton>Church of St Michael, Stockton 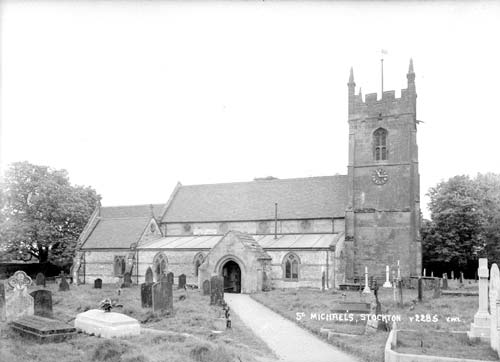 The Church of St Michael in Stockton was restored during the Imperial period and only a few features remain of the original Medieval building.

1 Chancel, nave, N and S aisles, W tower, vestry and N porch. Except for the 14th century S wall of the chancel and the 15th century tower the church is modern. The chancel was partly rebuilt in 1809, the nave and N aisle are of 1863 and the S aisle of 1873.
2 Perpendicular W tower of red sandstone. The church is of blue lias, which is quarried in the immediate neighbourhood, and of 1863-73 by W Slater. Only the chancel arch seems old and Perpendicular.
3 Noted.
4 Watching Brief commissioned by Acanthus Clews Architects. A layer of disturbed graveyard soil was recorded. A small amount of charnel was recovered, as well as two in-situ burials, one coffined. The date of the burials could not be ascertained. The original medieval foundation walls for the south wall of the west twoer, the west wall of the south aisle and the butress between them, were also revealed. At least two medieval tiled floor surfaces were also recorded within the building, including examples of patterns not paralleled in Chatwin.