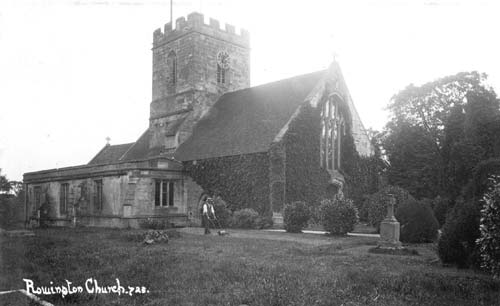 The Parish Church of St. Lawrence which was originally built during the Medieval period. It was largely restored during the Imperial period. The church is situated 150m north east of Rowington Mill Bridge.

1 Plan of the church. Nave with N and S aisles, central tower, N aisle, ante-chancel, and chancel.
2 Nave probably late C13, but the N wall may be the relic of a still earlier church. Central tower built c1330 within the E end of the nave, leaving shallow transeptal chapels to N and S, and was followed immediately by the addition of the chancel. In the early C15 the two arcades were inserted in the nave, and the chancel arch rebuilt and probably widened. The W doorway and window are also C15, and the N half of the W wall was rebuilt at the same time. N aisle-chapel added 1554; an earlier chapel recorded N of the chancel seems to have been entirely destroyed, but two windows reset in the N wall may have belonged to it. S porch of 1906. C16 roofs. C12 font. C15 stone pulpit in tower, C15 oak screen separates the chancel from the N aisle. The church was given with the manor to Reading Abbey, to which it was appropriated at an early date. It is recorded in 1291.
3 Photograph of the interior looking east.
4 The church has a Norman N wall. By the late C13 the nave had the present width. Crossing tower about 1300. Church restored by Bodley and Garner 1882.
6 Noted by Ordnance Survey.