You are here: Home>Locations>King's Newnham>Church of St Laurence, Kings Newnham. 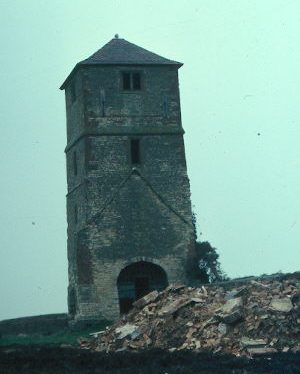 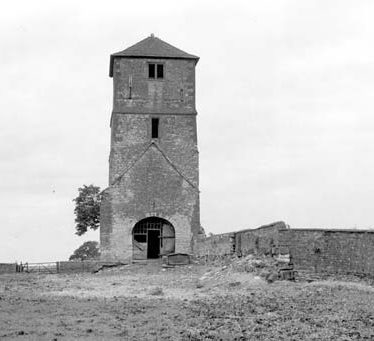 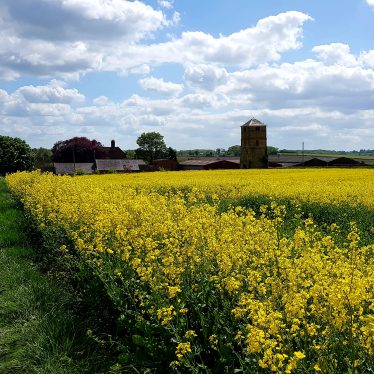 2 Entirely demolished about the middle of the 18th century except for the tower. Of roughly coursed limestone rubble with limestone dressings, and rises in four stages. The upper stage has been rebuilt, and the walls repaired with red brickwork. Modern roof, but the floors are missing. Rebuilt tower arch with the line of a steep-pitched nave roof above. Tower is difficult to date, but a narrow round-headed window has the appearance of late 12th century work. Incised inscriptions of 17th century and 19th century date within site of nave. Font, pillar piscina and stoop in farmhouse garden. The church is recorded in the early 13th century, when it was appropriated to Kenilworth Priory. The living was united with that of Church Lawford in 1595.
3 Drawing of c1820.
6 The church appears to have been a private chapel to the mansion (Newnham Hall, PRN 3450) as well as a parish church. In the 18th century it was allowed to fall into a dilapidated condition, and c1797 it was torn down, the tower being saved by the intervention of the Bishop. In 1852 the site was cleared and fenced in, and in excavating for the foundations the coffins of the Earls of Chichester were found. The bodies were embalmed, some in excellent preservation, and one was of a man who had been beheaded. After examination they were reburied. In the tower at a great depth burnt and black animal matter was found, with evidence of pagan burials below the Christian.
7 Fragment of nave N wall survives, of sandstone ashlar, approximately 5m long and 1m high.
8 Fragments of 17th century wall painting from the church acquired by Warwick Museum 1953.

Linkedin
More from King's Newnham
More from Chapels and Churches