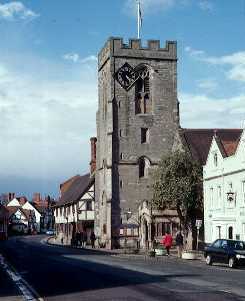 The Parish Church of St John the Baptist which was originally built during the Medieval period. It is situated 100m south of the Henley-in-Arden Village Cross.

1 Description: Undivided chancel and nave, with N aisle and vestry, tower W of the aisle and porch W of the nave. The main body of the church is probably of about 1450 and the aisle somewhat later in the 15th century. The tower is earlier than the aisle and probably also than the nave. Restored in 1900. A chapel was recorded here in 1367; no trace remains, except perhaps the tower of the present church.
2 Photograph of the exterior.
5 OS Card.
6 Pamphlet with information about the church.