You are here: Home>Locations>Southam>Church of St James, Southam 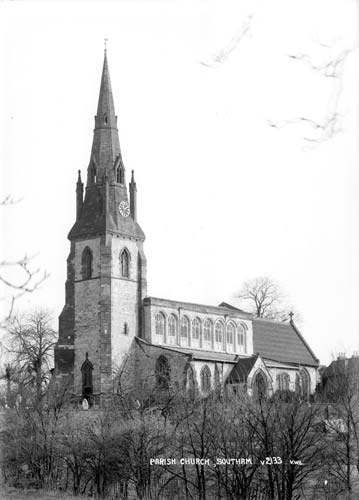 The Church of St James, built in the Medieval period, with modifications in the Imperial period. The church is situated 50m south west of the Southam war memorial.

1 Chancel with N aisle, nave with N and S aisles, W tower with spire, N and S porches and vestry. 14th century, altered in the 15th century when the spire was added, the chancel rebuilt and aisles widened. 16th century clearstory. Vestry and N aisle to chancel added in recent times, when S porch and N wall of N aisle were rebuilt. Much restored.
2 Photograph of the interior.
3 Chancel rebuilt 1853-4, chancel arch 14th century, nave 14th century with early 16th century clerestory. 14th century W tower, the spire 15th century and 19th century.
4 St James church, red sandstone and lias. The tower is 14th century, the spire probably 15th century.
5 OS card.
6 Archaeological work carried out during the construction of a new floor, within the nave and aisles of the church, recorded archaeological finds and features associated with earlier phases of the building. Several sections of wall foundation and a small area of mortar flooring were found which formed part of an earlier, probably 12th-century church. The foundations of two of the piers of the 14th-century nave arcade, along with those of the tower arch and part of the chancel arch were also exposed. Some in situ medieval floor tiles were recorded, together with some medieval graves.