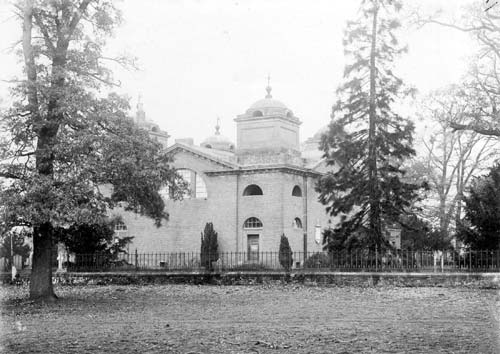 The Church of St. James, which as built during the Imperial period in red brick with stone dressing. It is situated 800m north east of Packington Hall.

1 Built in 1789. Architect Joseph Bonomi. Rectangular with a tower at each angle. Red brick and stone dressing. Each face is identical, having an open pediment and lunettes. The towers, of stone, have smaller lunettes, panels, cornices and leaded domes with finials and weather-vanes. In each angle of the nave is a Doric fluted column supporting a groined vault. The Corinthian altar-piece has a painting by Rigaud.
2 The architect based this church on the plan of a church near Rome.
3 ‘The most important and the most impressive church of the ending C18’
4 Built by the fourth Earl of Aylesford to commemorate the return to sanity of George III in 1789
5 Photographed in 1977.
6 Detailed report and note on the state of repair.
7 Archival material from 1992.