Church of All Saints, Leamington Hastings 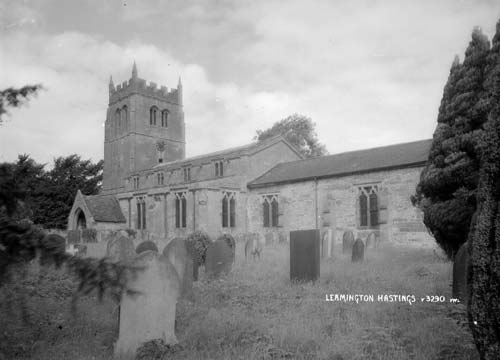 The Parish Church of All Saints. It was built during the Medieval period, with later alterations and additions through to the Imperial period. The church is located in Leamington Hastings.

1 Chancel, nave, N and S aisles and porches, and W tower. Built about the middle of the 13th century, it then consisted of chancel, nave and S aisle, and soon after a N chapel was added. Nave and S aisle extended by two bays at the beginning of the 14th century, and a S porch added. About the end of the 14th century the N chapel was extended to form the N aisle, and the tower and N porch built. 1677: Chancel entirely rebuilt, nave clearstorey added, S aisle windows replaced and the aisles re-roofed. 1703: Much of the S side of the church rebuilt and the S porch extended. 1875: Extensive repairs, the chancel re-roofed, the nave roof ceiled, etc. In the belfry are corbels for a spire which was either never built or has been destroyed. 16th century pulpit. There was a priest here in 1086.
2 Plan of the church.
3 Chancel dated 1677 above the E window. The proportions of the chancel inside are indeed curiously like those of a drawing room. Clerestorey windows could be 17th century, though they look rather 16th century.
5 Noted by Ordnance Survey.
6 Leaflet about the church.