You are here: Home>Locations>Atherstone>Alder Mill, Atherstone 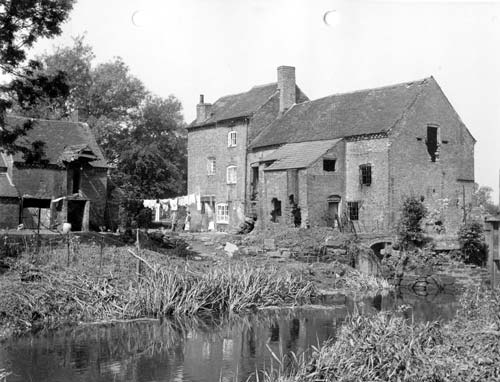 The site of Alder Mill, a Post Medieval watermill which was situated 120m south of Fieldon Bridge.

1 There was a mill in Atherstone in 1633 and it may have stood on this site. Various owners are recorded in the 19th century and 20th century. In 1849 the property was offered for sale and the description in the sale catalogue reads ‘The mill contains an excellent undershot wheel and three pairs of stones…’. The mill is thought to have become disused in the 1920s and was later used as a dwelling though the machinery remained in position. It was condemned as unfit for habitation and demolished in 1970. The site is now marked by a pile of rubble. The outline of the building and the wheelpit can be traced. Several millstones lie within the site, and others were used many years ago to build a wall. The watercourses near the mill are intact.
2 The ruins of a blue brick building and cuttings in the river were visible in 1977.
3 The buildings and mill stream are shown.
4 An approximate replica of the Old Mill House was rebuilt on the same site pre 1980.

Linkedin
More from Atherstone
More from Mills
More from Windmills, Watermills and Cornmills