You are here: Home>Locations>Tysoe>The Red Horse of Tysoe, or “The Nag of Renown”

The Red Horse of Tysoe, or “The Nag of Renown” 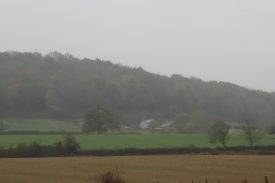 Where the first three red horses of Tysoe would have been.
Image courtesy of Gary Stocker 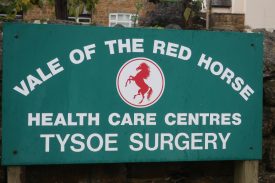 How the red horse name lives on in Tysoe.
Image courtesy of Gary Stocker 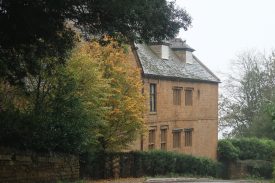 Chalk horses carved into hill sides, whether they are ancient like the one at Uffington or more modern, like some others in the locality. However, there was a red horse carved into the hillside above the south Warwickshire village of Tysoe up until about 1910.

A succession of horses

When I say “horse”, there was actually a succession of one after another. The earliest one to be mentioned was in 1606 by the cartographer, John Speed. The following year Camden mentioned in his book, Britannia. He was coming down the Fosse Way, north of Pillerton. So it would have been visible at a range of four miles.

Various other people mentioned it over the centuries. However it appears that they may have been talking about different horses. The first horse was thought to be from pre 1607 up until sometime in the late 17th century. William Dugdale mentions the first, large horse in 1656. A Celia Fiennes, about 30 years after, mentions what appears to be the second, smaller horse, which was cut in the same area where the first horse was. The third, even smaller horse, facing in the opposite direction, seems to have been described by a Reverend Wise in 1742.

Why all the different horses?

The horse was created just by stripping the turf from the top soil. The top soil is red, which obviously created the red colour. However because of the fertility of the soil, it would have to have been weeded, or “scoured” on a regular basis, otherwise it would get grown over and lose its shape. So any disruption, whether caused by local or national problems, which kept it from being scoured, would mean it disappearing and a new one being cut. Cutting a smaller one, if you could get away with it, meant less work!

He did cut a smaller horse closer to the pub, but he did not fool anyone. It disappeared during the course of the century. A new landlord cut a new one at the turn of the 20th century, only to destroy it in about 1910. Apparently he did not like people visiting to look at it. The landlords there seemed to have a funny way of doing business (a bit like my local!); I am not surprised that the inn has become a private house.

A lot of research was painstakingly carried out in the 1960s. Using a combination of old maps, old records, aerial photography, interviews (some older people vaguely remembered the last horse) and archaeology all of the above and more was found out.

Why is it there though and when was it first scoured? A common belief was that the Earl of Warwick had it put there to commemorate his horse which got killed in the Battle of Towton in 1461. Other people think that it may have been cut to mark a boundary between Saxon and Celtic territory.

Ghostly hoof beats have been heard around there and some say that it might be associated with whatever the red horse was put there to commemorate, rather than with the Battle of Edgehill, which was fought nearby.

Although it has sadly disappeared, the name is still commemorated locally with different place names and there was even some talk, a few years ago in the Banbury Guardian, about cutting a new one.

email
More from Tysoe
More from Folklore and Myth